What was the most important part of the pope’s trip? 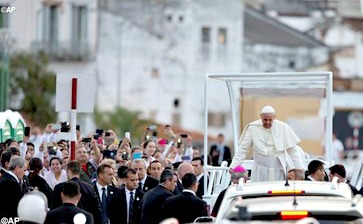 The papal spokesman had a ready answer:

Asked by a journalist, here in Asuncion, during the final press briefing, what he thinks is the main common denominator of Pope Francis’ three-nation Latin American tour, Papal spokesman Fr Federico Lombardi didn’t have to think too hard. No, he didn’t say “the appeal for justice and equality,”  “closeness to the poor and the needy” or “the call to leaders to combat corruption”; he didn’t even talk about the strong Marian dimension of the journey or about Pope Francis’ embracing pastoral approach as he reached out to millions of faithful during massive Eucharistic celebrations, private moments of prayer, encounters with his fellow bishops and with representatives of civil society. Father Lombardi’s answer was simple: “the overwhelming participation and warmth of the people”. This may sound rather quaint – perhaps banal – to some European ears, but here in Paraguay, from where I am reporting, the love of the people for their Pope really is overwhelming and joyous. Perhaps that’s why  the word “Joy” was chosen as the common thread in the logos for his visit to all three countries with the one in Ecuador reading: “Evangelise with Joy”; in Bolivia: “With Francis, let us announce the Joy of the Gospel”; in Paraguay quite simply: “Pope Francis: Messenger of Joy and Peace”. And judging by the reaction of the people here, that is exactly the message they need to receive.