What we have come to: the rich who are too busy now hire others to have their babies for them 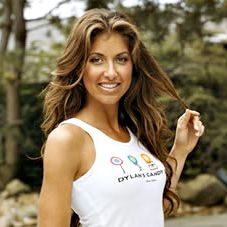 The 41-year-old daughter of fashion icons Ralph and Ricky Lauren welcomed fraternal twins Cooper Blue and daughter Kingsley Rainbow four months ago with husband Paul, 44. And, in a recent interview with Cricket’s Circle, she explained why she thought the decision to have the little boy and girl via surrogate was ‘a wonderful option’.

‘We chose to use a surrogate as the way we wanted to start our family, particularly as I was traveling across the globe on a stressful schedule to get stores open,’ she said.

‘I have many friends who had kids solo, who adopted, who used surrogates – no one was judging them – it’s a new world!’

Dylan, who is the founder and CEO of candy store chain Dylan’s Candy Bar, has already begun giving her little ones nicknames based on her favorite sugary treats, including ‘Twinkies,’ ‘M&M’s’ and the ‘Doublemint Twins’.