The other side of Memorial Day 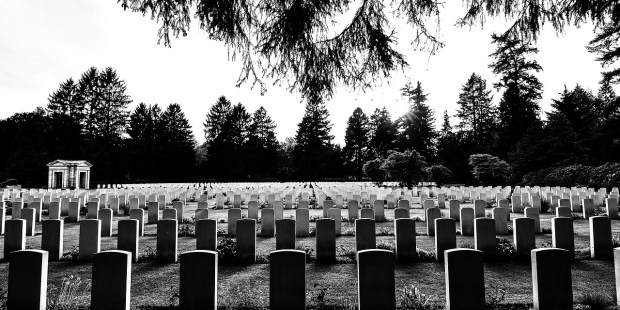 Share
Print
Tod Worner - published on 05/27/17
We are walking fast because we have to.

After all, we’re nearly late.

Having very recently been sleeping, my daughters’ eyes are bleary. The drizzling rain wakes them further. And then we see them.

Up on the hill in the cemetery, they stand shoulder to shoulder. Men and women wearing oversized yellow rain jackets and medaled berets, legs spread at shoulder width and hands on the noses of rifles planted in the ground. Though older, grayer and a touch more stout, they stand firm. And proud.

Flags adorn various graves. A smattering of men and women stand in attendance, a few with fresh flowers in their hands. Hats have been removed as the national anthem is about to be played on the tinny tape player.

The eldest (and presumably highest ranking) veteran offers his thanks and a few solemn words about freedom and sacrifice and honor. Heads nod in response. The soldiers’ guns fire in salutation and my daughters scamper for the empty shells. Taps is played on the tape player since there is a shortage of available bugle players.

And then it is over.

All in all, it is intimate, wistful and peaceful.

But war is not.

Never having fought in battle, I will never fully comprehend what these men and women have trained for, seen and experienced. There are times that I think of war as bulldog-ish Churchillian orations of Blood, Toil, Tears & Sweat, as gritty youth racing up dangerously open Normandy beaches, General MacArthur inspiring the men to pour into the Korean north to liberate the recently attacked south and my even-tempered brother-in-law driving through the Iraqi desert as Saddam’s weary forces approach him to surrender.

And I hear Shakespeare’s inspiring Henry V sitting astride his horse on the morning of the Battle of Agincourt, galvanizing his men to fight with his St. Crispin’s Day speech.

This day is called the feast of Crispian:
He that outlives this day, and comes safe home,
Will stand a tip-toe when the day is named,
And rouse him at the name of Crispian.
He that shall live this day, and see old age,
Will yearly on the vigil feast his neighbours,
And say ‘To-morrow is Saint Crispian:’
Then will he strip his sleeve and show his scars.
And say ‘These wounds I had on Crispin’s day.’
Old men forget: yet all shall be forgot,
But he’ll remember with advantages
What feats he did that day: then shall our names.
Familiar in his mouth as household words
Harry the king, Bedford and Exeter,
Warwick and Talbot, Salisbury and Gloucester,
Be in their flowing cups freshly remember’d.
This story shall the good man teach his son;
And Crispin Crispian shall ne’er go by,
From this day to the ending of the world,
But we in it shall be remember’d;
We few, we happy few, we band of brothers;
For he to-day that sheds his blood with me
Shall be my brother; be he ne’er so vile,
This day shall gentle his condition:
And gentlemen in England now a-bed
Shall think themselves accursed they were not here,
And hold their manhoods cheap whiles any speaks
That fought with us upon Saint Crispin’s day.

But St. Crispin’s Day (like all war) was preceded by the night. The dark night of loneliness and uncertainty, of a fear known to only a select few – those who are about to die.

That night before battle, as Henry V disguises himself and walks among his soldiers he hears their misgivings; he sees their careworn faces and furrowed brows. And as he sits at the fire with Williams, the impossibly young soldier, he heavily considers the boy’s grave words,

But if the cause be not good, the king himself hath
a heavy reckoning to make, when all those legs and
arms and heads, chopped off in battle, shall join
together at the latter day and cry all ‘We died at
such a place;’ some swearing, some crying for a
surgeon, some upon their wives left poor behind
them, some upon the debts they owe, some upon their
children rawly left. I am afeard there are few die
well that die in a battle; for how can they
charitably dispose of any thing, when blood is their
argument? Now, if these men do not die well, it
will be a black matter for the king that led them to
it; whom to disobey were against all proportion of
subjection.

Those of us who are not veterans (or besieged citizens) will never know the true horror of war, nor the fortitude to withstand it.

When reading Robert Kaplan’s words about his experience embedded with Marines in the Iraq War’s Battle of Fallujah, he almost presumed that since he went where they went, ate what they ate, slept where they slept, he was nearly a Marine himself. Until the hail of bullets and RPG fire peppered their scrap iron shelter and he witnessed what happened next:

Smith did not have to order his Marines straight into the direction of the fire; it was a collective impulse—a phenomenon I would see again and again over the coming days. The idea that Marines are trained to break down doors, to seize beachheads and other territory, was an abstraction until I was there to experience it. Running into fire rather than seeking cover from it goes counter to every human survival instinct—trust me. I was sweating as much from fear as from the layers of clothing I still had on from the night before, to the degree that it felt as if pure salt were running into my eyes from my forehead. As the weeks had rolled on, and I had gotten to know the 1/5 Marines as the individuals they were, I had started deluding myself that they weren’t much different from me. They had soft spots, they got sick, they complained. But in one flash, as we charged across [the road] amid whistling incoming shots, I realized that they were not like me; they were Marines.

This is the other side of Memorial Day.

Honored (and to the uninitiated eye, obscured) by the day’s flags and flowers, smiles and salutes is the deep sacrifice and painful memories of soldiers who gave the “last full measure of devotion.” They gave their time, their youth, their limbs, their lives, their peace. All in the name of duty, honor and country.

On this rainy Memorial Day, we are walking fast because we have to.

It’s the least we can do.

To all the men and women who have given their lives for our country, thank you.