The poet and the logician – G.K. Chesterton and “Men of Science” 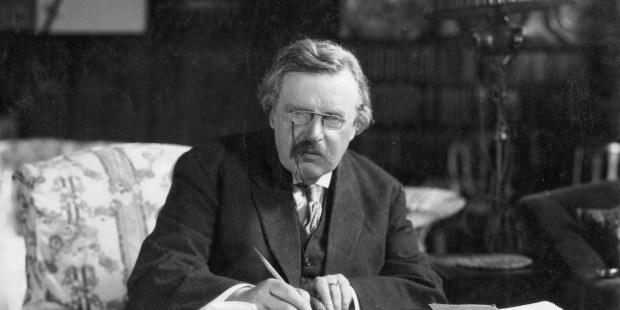 Share
Print
Tod Worner | Jul 18, 2017
Shakespeare did it. So did Montaigne. And even Plutarch.

And they did it so well.

In William Shakespeare’s plays, Michel de Montaigne’s essays and Plutarch’s Lives, these three masters tried to share a glimpse of human nature. While the agony of Hamlet, the advice on educating children and the blossoming of Cicero are captivating reads, more importantly, they are small treatises on what makes man tick.

We have an innate curiosity about ourselves – our qualities and quirks, our habits and our hang-ups, our missions and our mysteries. As created children of a loving God, we and our world are meant to be explored and discovered. We are a riddle to be savored more than to be fully solved.

But sometimes we forget that.

Advances of science have afforded an unparalleled unfolding of creation. Today, we simultaneously peer into the smallest micron of inner space as we gaze to infinitely distant outer space. With advancements in computer technology and communications, medicine and military capabilities, mankind is on such an extraordinary trajectory that we convince ourselves that there are no limits to our comprehension of our world and ourselves.

But there are limits. And there always will be.

The desire to know is God-given. The temptation to know all is not.

Though it be obvious, nowadays we need the gentle reminder: We are not God and we will never know it all. The complexity of our world and, even more, of ourselves magnificently lured Plato and Aristotle, Galileo and da Vinci, Shakespeare and Montaigne to gleefully (and arduously) explore the vast wilds that make up man. But these geniuses always knew that they were just scratching the surface. Comprehensive, seamless, definitive and final explanations were simply not considered plausible. In fact, such a pipe dream was laughable. Consider the depths of Claudius’ concealed guilt in Shakespeare’s Hamlet, the thousands of words Montaigne spilled in his unending exploration of himself, the dialogues that would never had ended but for Socrate’s drink from a cup of hemlock, and the undeveloped masterworks of art and engineering lost tragically upon Leonaro da Vinci’s death. To be sure, the mysteries of man and his world could be (and will be) endlessly plumbed. These brilliant minds toiled and played, puzzled and preened. They lost themselves in wonder. But there is one thing they never forgot…

They knew that they were not God.

G.K. Chesterton wrote about this phenomena over one hundred years ago in his masterpiece of Christian apologetics, Orthodoxy. Thanks to a healthy dose of C.S. Lewis’ described “chronological snobbery” (the tendency to think the latest era is the wisest because it is the latest), many modern thinkers propose their all-encompassing philosophies rife with answers, but devoid of God. These theories, ideologies and worldviews have dotted the intellectual landscape offering The Answer. Systems dreamed up in sweaty beerhalls or the British library, ideologies born of the ivory tower or angry asceticism have mapped out a totalistic, comprehensive explanation for who we are and who we are supposed to be. Each system insinuates, without fully admitting it, that it is – if “appropriately applied” – perfect. Even further, it is reasoned that, properly put into action, this system will come close to realizing heaven on earth. The problem is, that when you sober up from the beer hall, walk into the blinding light from the library, descend from the ivory tower or come in to town from the wilderness, the theories don’t necessarily work so well. What was perfect in the abstract is, in fact, abominably clunky in practice. What’s more is that these theories are often cold and empty, efficient and soulless. “These theorists,” Chesterton observed, “understand everything, and everything does not seem worth understanding.”

The modern theorist is a Man of Science. Now as a practicing physician, I consider myself a humble practitioner of science while I am also a practicing Catholic (not mutually exclusive). But Chesterton’s modern theorists, Men of Science, apparently, don’t need God. They simply need their process of proving things. Never mind the innumerable facets of life (love, an appreciation of beauty, loyalty, courage, a sense of purpose) that cannot be subjected to the scientific method (a shortcoming of the method and not that which is being studied). As modern theorist and Man of Science, Stephen Pinker scoffs,

Most of the traditional causes of belief—faith, revelation, dogma, authority, charisma, conventional wisdom, the invigorating glow of subjective certainty—are generators of error and should be dismissed as sources of knowledge.

In Orthodoxy, Chesterton reasoned that for each of the theories attempting to explain the world, one could in good Conscience call them ridiculous, or at best say, “you make a reasonable case, but what a great deal you leave out.” Because by omitting God and neglecting Mystery, all the intellectual and political exercises fall supremely flat. They speak of humanity, but fail to know man. Chesterton observed,

[The modern theorist’s] cosmos may be complete in every rivet and cog-wheel, but still his cosmos is smaller than our world. Somehow his scheme, like the lucid scheme of the madman, seems unconscious of the alien energies and the large indifference of the earth; it is not thinking of the real things of the earth, of fighting peoples or proud mothers, or first love or fear upon the sea.

Modern theorists craft a narrative that dehumanizes, that moves men around like docile pawns or whipped pack animals plodding along in the hopes of utopia. But without fail, man’s comprehensive philosophies arrange all the puzzle pieces, and just as they are placing the last few, they realize that the puzzle has shifted, a dozen other pieces don’t fit anymore and several others are, in fact, missing. Science and Reason alone, awkwardly, can’t seem to explain our world and ourselves. As Chesterton wrote,

That unmistakable mood or note that I hear from [the insane asylum], I hear also from half the chairs of science and seats of learning to-day; and most of the mad doctors are mad doctors in more senses than one. They all have exactly that combination we have noted: the combination of an expansive and exhaustive reason with a contracted common sense.

But to open ourselves to God, to recognize the eternal limits of our knowledge, to embrace Mystery with wonder as opposed to Materialism fueled by denial or petulant frustration… is to truly enter into wisdom. Faith and Reason (Fides et Ratio) serve as the fundamental brick and mortar necessary to build a sense of ourselves and our God. And we find that while logic is essential, the poetry of life is transcendent and the mysticism of life offers sanity. Chesterton again,

The general fact is simple. Poetry is sane because it floats easily in an infinite sea; reason seeks to cross the infinite sea, and so make it finite. The result is mental exhaustion… To accept everything is an exercise, to understand everything a strain. The poet only desires exaltation and expansion, a world to stretch himself in. The poet only asks to get his head into the heavens. It is the logician who seeks to get the heavens into his head. And it is his head that splits.

The whole secret of mysticism is this: that man can understand everything by the help of what he does not understand. The morbid logician seeks to make everything lucid, and succeeds in making everything mysterious. The mystic allows one thing to be mysterious, and everything else becomes lucid.

Science is a beautiful tool, but it is a terrible god. We are called to humility in accepting that the unknown and uncertain will always be with us. We are called to be both poets and logicians at the same time. We are asked to sit in glorious wonder at the brilliance of our world while sitting dumbstruck by its staggering incomprehensibility. We are in awe, but we are only scratching the surface.

Shakespeare knew this. Montaigne too. And even Plutarch.

Perhaps G.K. Chesterton never said it better than in the wake of his conversion to Catholicism. He arrived home from the church and lovingly penned this poem,
The Convert (in part).

The sages have a hundred maps to give
That trace their crawling cosmos like a tree,
They rattle reason out through many a sieve
That stores the sand and lets the gold go free:
And all these things are less than dust to me
Because my name is Lazarus and I live.