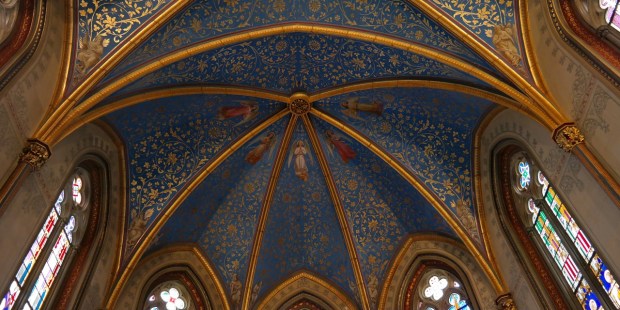 And Evelyn Waugh set it up beautifully in his classic novel, Brideshead Revisited.

Brideshead Revisited tells the story of the unfolding relationship between the young agnostic Oxford student, Charles Ryder, and his charismatic, yet troubled friend, Sebastian Flyte. Charles, entranced by the magnetic grace of Sebastian, finds himself drawn into the Catholic faith and dysfunctional drama of Sebastian’s family. And much of the drama happens at the Flyte family’s ornate, haunting country estate of Brideshead.

Instantly enchanted by the sublime artistry and soaring architecture of Brideshead, Charles found himself engaged in a discussion on the nature of the estate’s chapel with Sebastian’s elder brother, Bridey. Bridey inquired,

“You are an artist, Ryder, what do you think of it aesthetically?”
“I think it’s beautiful,” said [Sebastian’s youngest sister] Cordelia with tears in her eyes.
“Is it Good Art?”
“Well, I don’t quite know what you mean,” [Charles] said warily. “I think it’s a remarkable example of its period. Probably in eighty years it will be greatly admired.”
“But surely it can’t be good twenty years ago and good in eighty years, and not good now?” [asked Bridey]
“Well, it may be good now.” [Charles answered.] “All I mean is that I don’t happen to like it much.”
“But is there a difference between liking a thing and thinking it good?”

Is there a difference between liking a thing and thinking it good?

Is there a Truth that remains True in spite of our difficulty with it?

When I was younger and I complained that something wasn’t fair, my dad wisely (and not unsympathetically) told me, “Sometimes, the Truth hurts.”

And Flannery O’Connor acidly observed, “The truth does not change according to our ability to stomach it.”

Bridey’s question, “Is there a difference between liking a thing and thinking it good?” was just one epiphany drawn from a sea of others that would awaken Charles to the nature of Truth. Good, in Bridey’s question, is enduring and transcendent. Goodness is Truth. And Truth is not a matter of taste or preference. It is not malleable or fungible. Its Truthfulness does not depend on our liking it. Truth, simply to be Truth, is fixed. Instead, what changes is how close or how far we are from apprehending Truth and living by it. Bridey posed a question to Charles that juxtaposes subjective opinion with ultimate Truth. And Charles has no answer.

How many winds of doctrine have we known in recent decades, how many ideological currents, how many ways of thinking. The small boat of the thought of many Christians has often been tossed about by these waves – flung from one extreme to another: from Marxism to liberalism, even to libertinism; from collectivism to radical individualism; from atheism to a vague religious mysticism; from agnosticism to syncretism and so forth. Every day new sects spring up, and what St Paul says about human deception and the trickery that strives to entice people into error (cf. Eph 4: 14) comes true.

Today, having a clear faith based on the Creed of the Church is often labeled as fundamentalism. Whereas relativism, that is, letting oneself be “tossed here and there, carried about by every wind of doctrine”, seems the only attitude that can cope with modern times. We are building a dictatorship of relativism that does not recognize anything as definitive and whose ultimate goal consists solely of one’s own ego and desires.

We, however, have a different goal: the Son of God, the true man. He is the measure of true humanism. An “adult” faith is not a faith that follows the trends of fashion and the latest novelty; a mature adult faith is deeply rooted in friendship with Christ. It is this friendship that opens us up to all that is good and gives us a criterion by which to distinguish the true from the false, and deceipt from truth.

Today, the winds are blowing hard. We are at risk for being tossed here and there, carried about by our egos and desires. We are in the dangerous position of considering our tastes, our proclivities, our inclinations to be our Creed, our Dogma, our Truth. Our compass spins and we call it peace.

It’s time to have a different goal. Christ, the True Criterion, who distinguishes the true from the false.

It was a simple exchange, really.

“Is there a difference between liking a thing and thinking it good?”

Yes. A world of difference.