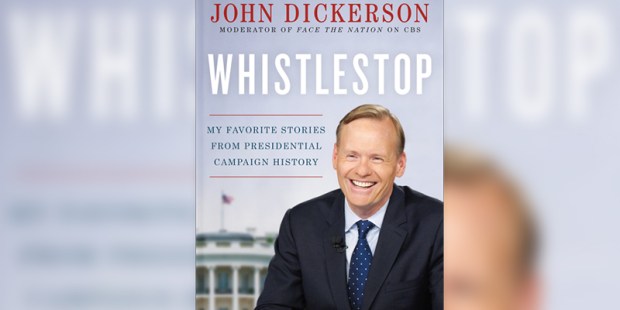 Hachette Book Group
Share
Print
Tony Rossi | Aug 02, 2017
With the recent paperback release of “Face the Nation” moderator John Dickerson’s book “Whistlestop: My Favorite Stories from Presidential Campaign History,” I’m re-posting parts of my interview with him (recorded in September 2016). The book is an educational, entertaining, and often surprising exploration of the good, bad and ugly of running for the highest office in the land.

During our conversation on “Christopher Closeup,” Dickerson and I discussed the historical precedent for angry and divisive political campaigns, social media’s effect on the voting public, and the role God and religion have played in elections past. Dickerson also revealed his spiritual side, including the roots of his Catholic faith and how fatherhood affects the way he approaches his job.

Here are some excerpts:

Tony Rossi: Before reading “Whistlestop,” I was looking at the 2016 presidential campaign and thought it was unprecedented in the sense of the divisiveness and insults being thrown at the candidates, against each other, and against the voters. But in your book, for instance, I read about Harry Truman comparing Republicans to Hitler and Mussolini, and calling voters “suckers.” Are there more parallels between past and present than we realize when it comes to presidential campaigns?

John Dickerson: There are. It’s amazing to think that Harry Truman in 1948 would compare anybody to the Nazis. The memory of the Nazis was quite fresh. Usually, when people do that today, it’s because they’ve lost their sense of history. But Truman knew – and everybody knew – what the Nazis were like, so that would have been an even greater insult than we have today. I think there are a lot of patterns that are repeated – that the outsider comes in and is an anti-establishment hero, which goes all the way back to Andrew Jackson in 1824 or Barry Goldwater in 1964 or George Wallace in 1968. That tracks and repeats a lot of what we see in Donald Trump.

TR: One of the chapters in “Whistlestop” is about John Kennedy, the Catholic candidate. But before we get to Kennedy, was there a big emphasis on God or religion in campaigns prior to 1960 or was that a watershed year?

John Dickerson: There was an emphasis before, going back all the way to 1800 when John Adams was running against Thomas Jefferson. Adams’ supporters claimed that Jefferson was going to take Bibles out of people’s houses, that he didn’t care about religion. It was very much a part of that race, in terms of denigrating Jefferson, trying to make him seem like a godless humanist.

It’s always been in the races one way or another. In 1884, when Grover Cleveland had an out-of-wedlock child, there was certainly a religious component to the criticism of him…I would add in 1884, one of the reasons James G. Blaine lost is that a Reverend Urchard in New York was at a Blaine event and said that the Democrats bowed to the “gods of rum, Romanism and rebellion.” The Irish Catholics in New York were furious about that shot at the Pope and made Blaine pay for it.

TR: One of the more modern elements to politics is social media, not just in terms of a candidate’s presence there, but the fact that voters can live in news silos of sorts where they only get news from the viewpoint they already agree with. In a sense, I think that makes voters in the Information Age, ironically, less well-rounded when it comes to the experiences of others who believe differently. What’s your take on social media’s role in campaigning and in modern politics?

John Dickerson: I think you’re right. It does allow people to cocoon themselves. I think that another role that it plays, which is not good for the system, is that the hottest voices tend to participate in social media – people who are on the edges of the spectrum on both the left and the right. It’s a hard medium for tolerance. What happens – and studies have shown it – is that the people in the middle who don’t have really doctrinaire positions on one side or the other of an issue, tend to watch the debate as it plays out among the most heated voices, and they opt out. They just decide, “Look, this is not a conversation I want to get in. Nobody’s learning anything. It’s just a bunch of unpleasant accusations back and forth.” That drives the more reasonable, leavening, tolerant voices from the debate, and that’s definitely not good because [politics] is more complex than can be put forward in a 140-character tweet.

TR: I read a Parade Magazine interview with you a while back, and you mentioned that you attend 5:30 Mass on Saturday evenings in the church where you grew up. How does that weekly hour of worship weave its way into your life as a husband, father, and journalist? Does it ground you in a certain way?

John Dickerson: It absolutely does. It grounds me for all the reasons that the Catholic faith does for all of us who worship. But for me also, going to the church, Holy Trinity, where I went to Mass as a little boy, where I had my First Communion. The priest who married us was from Holy Trinity, Father James English who just passed away. It’s full of so many memories of my life and my childhood and the grounding nature of faith that I’ve always reached to. Also, in the case of politics and the world of television, there are a lot of things that can blow you off course and make you forget yourself. But that hour of worship and worship in general – no, I’m not as good as I should be – really help me try to keep the eye on the ball instead of getting distracted.

TR: How did those seeds of faith get planted in your life?

John Dickerson: Mom [ed. note: pioneering broadcast journalist Nancy Dickerson], in particular, was a very devout Catholic. My grandmother, her mother, went to Mass every day. My mother went to Clarke College for 2 years and Dubuque Catholic Girls School, so faith was a very important part of her life. It was a part of mine growing up. My father converted and became a Catholic. Even after my parents split, when I lived with my father, I would go to Mass at that same church when I was in high school. It just always has been with me.

I ended up marrying a Presbyterian. We both continue to worship, and that’s very much a part of our lives as we raise our children. We are hoping to do the kind of job our parents did with us in terms of trying to keep our children involved in the faith because of the role it’s played in our lives.

TR: Has being a parent affected the way you approach your job as a journalist or even look at politics in general since the decisions being made are going to affect your kids down the road?

John Dickerson: It does put a different frame on the way you think of policies and politics both because this is the world that they will live in…But also in terms of when I talk to my kids about what it’s like to be fair to the politicians I cover, what it’s like to be fair to people who disagree with you or people with a different view of the world than you have. All of that, when you have to say it out loud and talk about principles in politics and journalism, explaining it to a kid, it helps you put yourself back in touch with what your goals should be as a professional in a way that is very grounding.

TR: I’ve noticed from talking to you, from watching you on “Face the Nation,” you have a great sense of humor. You don’t seem to have that hardened reporter cynical edge that some people do. How have you managed to stay that more optimistic, hopeful person in the midst of a field that doesn’t always bring out the best in human nature?

John Dickerson: It’s a bit of a challenge. I think mostly it’s because I try to see the good in people. I think bringing joy to others – and not focusing always on those cynical and dire parts of things – is an important way to live one’s life. Going back to my faith, “judge not lest ye be judged,” that you can be an analyst and assessing in as clear-eyed a fashion as you can without slipping over into judging people’s motives, judging their hearts, and getting into more corrosive snap judgments, which condemn people and entire classes of people. If we think about people as being more human, with all of their frailties and complexities and recognize that in ourselves, it’s a better way to approach life than to be so ruthlessly judgmental in the way that we discard people.

TR: [What about] the Christopher idea that I talked about before: It’s better to light a candle than curse the darkness. When you hit times of darkness in your life, what do you do to metaphorically light that candle and move toward a brighter future?

John Dickerson: I think what I do is remain focused on trying to keep in my day a lot of small acts of candle-lighting as best as I can do them with the people I meet, with the friends I have. There’s a way in which you can try to plan your day where if it’s a part of your routine, just to try to bring some light. When the dark moods hit, obviously your faith is very strong. My family and my wife and my children are a constant source of brightness in my life whom I learn from. A friend of mine, his mother, another Catholic, his mother used to say, “By the measurement of eternity, these small moments of darkness, they’re all relative to the longer timeline.” That’s something that he’s reminded me of and taught me. In his life, he’s also a person in the public eye and taking a lesson from him has been helpful to me.