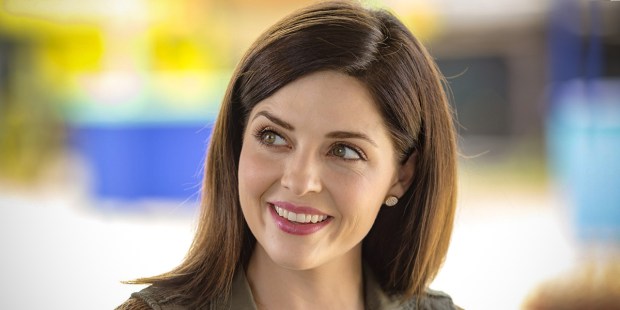 Crown Media | Hallmark Channel
Share
Print
Tony Rossi - published on 09/27/17
Jen Lilley doesn’t just play a mom in her new Hallmark Channel movie “Harvest Love” (premiering Sept. 30 at 9/8C), she recently became a foster parent in real life because of her passion for children in the most vulnerable circumstances. It’s a passion grounded in her upbringing, her love of God, and her empathy for devastated young people who’ve been victims of abuse, child pornography, and human trafficking.

In “Harvest Love,” Lilley plays Luna Gilson, a young surgeon and mother whose husband died a couple of years ago (and who is played in pictures by Lilley’s very-much-alive real husband, Jason). As a result, Luna throws herself into her work to forget about the pain, but winds up neglecting her son Andy.

After one particularly frazzling day at work, Luna takes her mother’s suggestion to visit the family farm for a few days to rebuild her bond with Andy. Once there, they meet Will, the farmhand played by Ryan Paevey, with whom Luna winds up butting heads. But in traditional romantic comedy fashion, they eventually fall in love.

Lilley appreciates Luna as a character because “she’s not just this fleeting young girl that is carried away by her emotions. She’s thinking with the right perspective…[The romance] is done so tactfully with an awareness of her husband who died…She gives herself permission to fall in love, and Andy has a father figure restored to him.”

As a Christian, Lilley enjoys doing movies for the Hallmark Channel (this is her third) because they’re “so uplifting.” But sometimes she’ll take an edgier role if she feels that’s what God is calling her to do. Jonathan Jackson, her former co-star on “General Hospital,” helped her define that approach by telling her, “When I’m deciding what roles to do, I always ask myself, ‘Is this doing more good than harm? Then I go from there.”

Lilley just turned down a script because the message of the movie was, “If you’re good in bed, he’ll marry you.” She wanted no part of that, saying: “That’s the furthest thing from the truth, and just setting girls up to get hurt.”

Initially, that was also her reaction when she was offered the role of Theresa Donovan on the soap opera “Days of Our Lives,” a character she wound up playing from 2013 to 2016. Theresa was a cocaine addict who never met a one-night stand she didn’t like. Lilley wanted to turn down the job, but she felt that God was calling her to do it instead. She didn’t understand why, so she took it to Him in prayer.

The answer she received was: “Because I died for the Theresas of this world…and you are My mouthpiece. You’re not afraid to speak My name…I need the audience to know that when they relate to Theresa, they are not beyond redemption.”

With that in mind, Lilley took the part, explaining, “She’s promiscuous. But as an actress, you have the opportunity that when that guy leaves, you get to play the unscripted silence. The unscripted silence is the void that’s still there. You see this guilt wash over her that’s like, ‘That didn’t fill me. I’m still empty, so I’m turning to drugs now. And that’s not filling me.’ What happened was, as an actress, I was able to force the writer’s hand in some ways, because now they have to tell that story. What is going to bring her fulfillment? By the time I left, Theresa becomes this selfless, amazing individual. They built a church set, the girl goes in, and she prays to Jesus and [says], ‘I can’t do this without You. I didn’t know where else to turn. I know I’m not a model citizen, but I don’t know what else to do.’ It was so amazing.”

Lilley’s faith manifests itself in the charities she chooses to support as well. She grew up in a home where her father was a judge, and her mother ran a crisis pregnancy center that would help young women going through unplanned pregnancies choose life for their unborn babies – or offer them counseling if they had already chosen otherwise. As a result, their home became a “safe house” for some of the youth her parents helped.

As Lilley moved forward in her career, she always made charity work a vital part of her life, focusing at first on water charities overseas (charitywater.org and The Thirst Project). But then she felt the Holy Spirit asking her, “Who in your own neighborhood needs help?”

She started investigating non-profits and discovered the Innocent Justice Foundation, which goes after child pornographers. That’s when she learned that the United States is the number one supplier of child pornography in the world. “The average victim is under the age of four..I remember being in my home office and just weeping…[and asking], ‘How is no one talking about this?'”

That’s why Lilley decided to speak up, which led her publicists to tell her to stop it because the general public doesn’t want to hear about such unpleasant things.

Her response: “You can either get behind me on this or you’re fired. I’m sorry, but that’s who I am. I’m God’s mouthpiece.” (Note: those people no longer work for her.)

Once she became known for children’s issues, her new publicist got a call from the organization Childhelp USA, which helps the victims of child abuse through education, treatment & prevention programs. They asked if Lilley would consider being a celebrity ambassador for them.

Lilley told me, “I research every charity that I endorse because in Proverbs it says you only have your name. You shouldn’t just lend your name willy-nilly to these charities that anyone can form. A lot of charities are deceptive, and they’re skimming the money off for their own [purposes]…[So] I told my publicist, ‘Tell them I want to see their tax returns for the last four years.'”

Lilley was happy to discover that Childhelp has been around for 60 years and has provided safety and healing to 11 million children. And their financials are impeccable, with between 89 and 93 cents of every dollar going toward the cause.

Motivated by James 1:27 – the Scripture verse that says, “Pure religion that’s undefiled before the Lord is this: caring for orphans and widows in their distress” – Lilley and her husband got involved with Childhelp’s mentoring program. She said it includes “children who have been so abused and neglected that the government renders them [unable to be rehabilitated]. They’re at their last stop before they go into Juvenile Hall. And I’m talking Juvenile Hall at eight years old.”

Childhelp’s founders, Sara O’Meara and Yvonne Fedderson, refused to give up on these kids because they believed God made us all “a new creation” and that redemption was possible. With a great deal of love and therapy, notes Lilley, “these kids go on to become teachers and senators and amazing people.”

Lilley learned that high percentages of children who have gone through foster care eventually wind up as trafficking victims, prisoners, or homeless. In order to be a light in the darkness to these kids, she and Jason decided to become foster parents themselves, earning their certification and license within three months through Childhelp’s Foster Family and Adoption Program (FFA) because the group has strong vetting procedures designed to weed out people who are just looking to take in kids to get money from the government.

In 2016, the couple welcomed a baby boy into their home. And while parenting is never easy, the joy and fulfillment he has brought into their lives provides an important lesson to the admittedly “workaholic” actress about the importance of family – a lesson similar to the one inherent in the story of “Harvest Love.”

One thing is certain about Jen Lilley. She has her priorities straight, and she won’t let anyone stop her from speaking up about and living her faith in a selfless, loving way.

(To listen to my full interview with Jen Lilley, click on the podcast link):