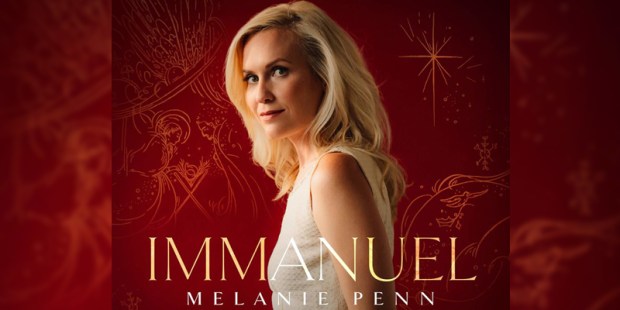 Sasha Arutyunova for Melanie Penn
Share
Print
Tony Rossi - published on 12/04/17
Like most Christians, I’ve heard and appreciated the Christmas story from Matthew’s and Luke’s gospels many times in my life. But when I listened to Melanie Penn’s new album, “Immanuel,” I gained some new perspective.

Unlike a lot of artists who release Christmas albums filled mostly with standards, Penn has written nine original songs from the points of view of the story’s leading figures: Mary, Joseph, the angel Gabriel, the Wise Men, the Innkeeper, and more.

During a recent interview on “Christopher Closeup,” she told me that she didn’t set out to make a Christmas album, but that God led her in that direction because those are the song ideas that kept coming to her. And through the creative process, she gained a new understanding of and appreciation for the meaning of Christmas.

Melanie admits that even as a believer, she can feel far removed from the Christmas story: “As I started writing these songs from the perspective of the characters, I [realized] these were our fellow human beings who had a totally supernatural experience 2,000 years ago. But they’re not that different from you and me. They were just normal people living their lives. And so it definitely humanized the whole narrative for me in a brand new way.”

The most difficult song for Melanie to write was “Great Things,” from the perspective of Mary, the mother of Jesus. It took her several months, and she only did it at the insistence of her producer, Ben Shive, because she was too afraid to delve into who Mary was as a person. Now, she’s glad she did.

“It helped me understand Mary a little better,” Melanie says. “It’s all conjecture, right? So on the other side I think that I’ll get to meet her in eternity and [ask], ‘Did I get it right? What do you think about the song I wrote for you?’ But there’s all these moments through Mary’s life where she’s at the wedding at Cana, and she tells Jesus, ‘Do something. They’re out of wine. Show your power.’ And then I think of her at the cross. Her life must have been so confusing, because an angel [had] appeared to her and said, ‘You’re going to have a child, and this is going to be a supernatural birth, and he’s going to be a king.’ Yet you look at Jesus’ life, and it didn’t play out that way. Mary must’ve constantly been in this tension of, ‘Wait, I know what the angel said. I didn’t imagine that. The reality is playing out, and it looks so different.’ So I think it showed me the Christmas story in a new way, and it also gave me compassion for these characters in the Bible that I’ve read about so many times.”

Another character for whom Melanie grew in compassion was the innkeeper: “There was a census. This was a rural place. There probably weren’t many public establishments. It was probably overrun, he was overworked, and then suddenly this weary bedraggled family knocks on the door and has no money and wants to stay for free…I think a lot of us close our eyes and our hearts, because we just get too busy and too tired. And we don’t have space. So not only does an innkeeper say, ‘I have no physical room,’ I think sometimes we just don’t have existential room to consider eternal truth. And so that becomes a larger question…How many moments are we creating where we can actually pause and think about what really matters?”

That approach signifies one of the greatest strengths of “Immanuel.” Not only does Melanie relate old stories in a new way, she presents them in a manner that allows us to look at ourselves in the modern world and see our own stories reflected in people who lived over 2,000 years ago.

For example, in the song “Follow the Star” from the Wise Men’s point of view, she sings:

All of my life, I’ve been watching the sky
To tell me what’ll happen when
I know the signs, how the stars align
There’s a message I’ve been trying to get

Tonight I can’t shake the sight
So I’m on my way
Where will it lead, the star in the east
I don’t know but I’m watchin’ the heavens

Could it be, you’re watching over me?
Shine on the darkest part
Yeah I think there’s more than I can see
So tonight I will follow the star

That idea of wondering whether there is some higher power looking over us conveys a contemporary sensibility, especially in an age where less young people align themselves with any faith group. And even lifelong believers go through their moments of doubt. Yet the lyrics wondering if “there’s more than I can see” might appeal to them and point them in the direction of the birth of Jesus, just like the star guided the wise men.

Creating music with a broad appeal reflects Melanie’s approach to art in general because she doesn’t see a distinction between Christian and non-Christian art. She says, “I’ve listened to music, and I’ve walked through art galleries, and I know for sure that the artists were never thinking, ‘How do I glorify God with this work?’ Yet I know that when I encounter it, it reminds me that there’s more to life. It points me to eternity. So just because the artist might not have intended to glorify God, doesn’t mean that’s not happening and doesn’t mean that the person who encounters the art doesn’t feel God’s presence. I think that’s a gift that God has given us: to be able to make things [that] can…impact people aside from what we may or may not believe or intend. The opposite is also true. I think we can make things that are destructive in culture. Art is very powerful, so it’s something that I hold very delicately. I think all creators of art need to take that responsibility seriously and bring things forward in the world that help renew people and give people hope.”

The determination to give people hope is a direct outgrowth of Melanie’s own spiritual evolution over the last two decades. When she first started writing songs, she says she would access the depths of her soul. “And oftentimes in the depths of the soul, there’s a lot of pain…As I’ve grown as a songwriter, I tend to gravitate toward other themes, more like the joy in life. That certainly doesn’t mean I don’t experience pain anymore. It might just mean that the older I get, I know that pain is temporary so I want to cut to the good stuff.”

That “good stuff” stems from the renewed experience of faith that Melanie experienced after she witnessed the terrorist attacks on Sept. 11, 2001, in her adopted home of New York City. Confronted by the horrors of the day and the tremendous loss of life, she came to hear the gospels and message of Jesus in a new, more profound way.

Melanie says she soon realized that “all these things that Jesus talked about in terms of how to live, these weren’t suggestions. These were ways he was pointing us to human flourishing, not to hold us back from life but to give us more life. It reframed for me what obedience is and what the Christian life looks like. I think sometimes Christians are looked at as [not having] any fun…Actually, I think Christians have more fun. They’re living with more joy because there are certian ways that the human soul was built to live. When you step into that truth, it opens up a whole new, more expansive way of life.”

Melanie hopes that her album “Immanuel” opens listeners to a new, more expansive way of looking at the Christmas story as well. And if one recent review is any indication, she is accomplishing her goal.

She concludes, “I hope that these songs are accessible and relatable and that they open the listener’s imagination to this story from 2,000 years ago, because that’s what they did for me. Someone left a review on iTunes a couple of days ago. I don’t know who it was, but they [wrote], ‘I’m not even a Christian, and I love this album,’ and a little emoji with the laughing and the tears. I thought, ‘Man, that’s a win right there!'”

(To listen to my full interview with Melanie Penn, click on the podcast link):