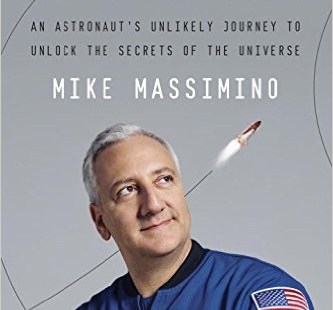 Share
Print
Tony Rossi - published on 06/06/17
Did you ever have a goal as a child that you eventually came to see as utterly ridiculous and unachievable? Mike Massimino sure did.

On July 20, 1969, when he was a six-year-old growing up in Long Island, New York, he watched Neil Armstrong walk on the moon. The excitement overwhelmed him, and he decided to be an astronaut when he grew up.

A few years later, however, the implausibility of that dream prompted him to give it up, especially since he was scared of heights, scared of the water, didn’t like the dark, couldn’t see that well, etc.

But implausibility doesn’t always mean impossibility. Today, Mike Massimino is a retired NASA astronaut who walked in space twice, saved the Hubble telescope, and even gained a new vision of God and heaven in the process.

It was in 1983, after seeing the movie “The Right Stuff,” that Massimino’s interest in joining the space program reignited. During a “Christopher Closeup” interview about his Christopher Award-winning memoir “Spaceman: An Astronaut’s Unlikely Journey to Unlock the Secrets of the Universe,” he recalled, “The basic ideas that I got out of the movie were the camaraderie between the astronauts and the view of the earth. That was something I wanted more than anything.”

Massimino had grown up around that sense of camaraderie because his father was a fire inspector, who was surrounded by “the brotherhood or sisterhood at the fire department.” The higher purpose of that calling also appealed to him: “The idea of people working together to do something good…Not just going out there and trying to make money or seek fame, but trying to do something socially useful that was making the world a better place.”

Since the space program had evolved, making room for more scientists and engineers, Massimino, who would soon be graduating with his engineering degree, wondered if his old dream might still become a reality some day. A combination of humility and self-doubt kept him from getting too cocky about actually becoming an astronaut, though. “There are lots of people that want to do this job and are qualified to do it. To get selected to do it, there’s a certain element of good fortune that comes into play.”

Good fortune, hard work, and helpful advice from mentors propelled Massimino forward and eventually led to him achieving his goal. He was selected as an astronaut candidate by NASA in 1996, and took his first flight into space on the Space Shuttle Columbia in 2002, on a mission to service the Hubble telescope.
As exhilarating as the thought of leaving the boundaries of earth was, it also brought fear. Massimino told me, “The day you launch into space, the probability is highest that it’s going to be your last day. It’s the most dangerous thing you’ll ever do.”

In “Spaceman,” Massimino writes that in the last weeks before the launch, he went from being “a decent Catholic” to “the most devout Catholic in the state of Texas.” His Italian-American relatives started showering him with religious gifts to convey the blessing of safety: a Madonna and child stautette, “a St. Christopher medal, St. Michael medal, a picture of Padre Pio, one of Our Lady of Loreto…crucifixes, rosaries, prayer cards.”

Massimino also started going to Confession more often because he wanted “a clean soul.” And as a husband and father of two children, he also viewed his family with a deeper sense of love and appreciation than ever before.

Thankfully, all went well, not just with the launch but with the mission to fix the Hubble Telescope. The responsibility of such an important project weighed on Massimino: “We were in direct line to destroy the whole thing, Tony. My foot in the wrong place could have taken out the whole telescope…Hubble [isn’t] just for scientists to get data and then publish a paper; it does unlock the secrets of the universe. It shows us what’s out there, the wonder of the universe and creation that we can’t get to. Hubble allows us to come up with these discoveries that are amazing. Things like the existence of black holes, planets and other solar systems, dark energy, dark matter, the size and the age of the universe…Even if you don’t have an appreciation for any of that, just seeing the beautiful pictures of what is out there, how beautiful the universe is.”

The view during his spacewalks had a spiritual effect on Massimino. Seeing the stars and moon and the vastness of the universe was awe-inspiring in itself, but looking at Earth from such a great distance made him compare it to “the view from heaven.”

He concluded, “The other thought that I had related to the faith [was] that as a father, as a parent, we try to provide our families with a nice home and nice environment to grow up in. When I saw our home [planet], I thought how much God the Father must love us to give us such a beautiful place to live. I really believe we are living in paradise. I can only imagine what heaven would be like, but I can’t imagine anything being more beautiful than our planet and I think we really need to appreciate what we have…I think it’s important for us to appreciate what we have around us and to appreciate the sunsets and the sunrises and the birds and the animals and our families and everything around us because there really is a lot of beauty.”

(To listen to my full interview with Mike Massimino, click on the podcast links):