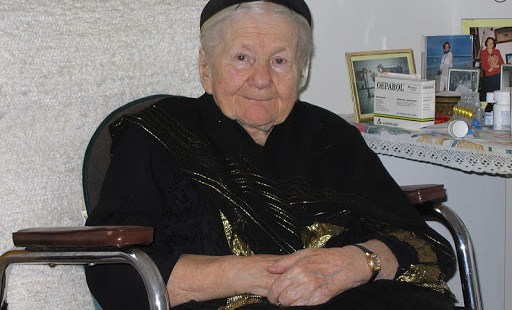 A lot of people are familiar with the story of German industrialist Oskar Schindler who saved 1,200 Jewish lives during the Holocaust by employing them in his factories. What you may not know is that there is a woman known as the female Oskar Schindler.

Irena Sendler was a social worker in Nazi-occupied Poland, whose efforts as part of the Polish resistance saved the lives of 2,500 Jewish children from the Warsaw Ghetto. Irena and a network of others, some of whom were motivated by their Catholic faith, faced danger with every step – and even endured torture.

Tilar J. Mazzeo is telling their story in the compelling and revealing biography “Irena’s Children.”

From her youth, Irena was both compassionate and strong-willed. During an interview on “Christopher Closeup,” Mazzeo explained, “Her dad was a physician and was involved with social work. He was one of the few doctors at that time who was willing to treat poor patients, especially poor Jewish patients. She grew up watching him engage in that kind of social justice. He died when she was very young from a disease that he caught treating impoverished patients. That [made] a profound impression on her.”

Irena went on to study at the University of Warsaw. Though she wanted to be an attorney, that wasn’t a career that included women at that time, so she instead became a teacher and, ultimately, a social worker.

Like many Poles, Irena grew up Catholic, but she didn’t hold fast to her religion in her young adult years. Mazzeo said, “She was, I think, as a teenager quite devout, but by the time she became a 20-year-old, she became a bit of a lapsed Catholic. She was married and that marriage was not working out. In her early 20s, she had fallen in love with a Jewish man, who was also married and became her boyfriend. There was this very bohemian period that she went through in her 20s and into her 30s. Later on in her life, after the war – especially following the death of one of her children – she does return to the Catholic faith in a very profound way…[But] I don’t think it takes anything away from her story that she struggled with human temptations that we all struggle with. She had this intense sense of righteousness and moral courage, and she risked her life over and over again to do the thing that was right and ethical for the children of other people.”

The courageous chapter of Irena’s life began when the Nazis occupied Poland. They eventually forced the Jews to build the Warsaw Ghetto, where they would live separated from the rest of the population. But with only 200 calories a day on their ration cards and medicine not being given to the Jewish community, epidemics of cholera and typhoid begin, leading the Nazis to start deporting Ghetto residents to death camps.

Irena had been working in the social welfare office the entire time, and she and her female colleagues decided that they would subvert the Nazis’ goals by continuing to give money to Jewish clients by creating a fake file for them. When the Jews were moved into the Ghetto, Irena arranged for a doctor to get her a pass so she could enter as an epidemic control worker. In truth, however, she wanted to get in because her boyfriend Adam now lived there with his family.

Mazzeo said, “As starvation and disease take hold in the Ghetto, Irena is a firsthand witness to the fact that there are lots of orphaned children. Their parents have died from hunger or starvation or have been shot, and so these children are living on the streets and starving. In order to go and see Adam, she had to walk over the bodies of children.”

Irena’s natural compassion kicked in, so she started smuggling street children out of the Ghetto and placing them with Catholic orphanages, convents, or foster families who were Polish. That meant a team of people needed to lie about these Jewish children and, in some cases, create false documents stating that they were Catholic. The amazing thing, notes Mazzeo, is that Irena said that “nobody ever said ‘no’ to her, although it meant risking their own lives and the lives of their own children to do that.”

Irena’s efforts intensified after the Nazis began massive deportations to the death camps that included tens of thousands of people a day. That hit home when she saw a group of children she had previously helped being marched to the train that would carry them to Treblinka to be exterminated.

Despite everything she accomplished, Irena balked at being labeled a “hero.” Mazzeo explained, “She said that heroes do extraordinary things, but ‘I did what anybody would have and should have done,’ which puts a lot of weight on all of us….The Jewish Holocaust Memorial in Israel estimates that maybe half of the Jewish children who were saved from the Ghetto [were saved by Irena] and her group…The other thing she really wanted to speak about was that for every child she saved, 10 Polish people in Warsaw risked their lives. She wanted to honor that fact. After the war, she wrote a list of everybody who helped her. That list was 14 pages long.”

Irena lived to see many of the children she saved have children (and grandchildren) themselves. Yet, she was plagued by nightmares her entire life. “She always thought that she should somehow have done more,” said Mazzeo, “[even though] there isn’t more that she could possibly have done.”

In addition, Irena didn’t achieve her happy ending after the war because then the communists took over and made life hell for the Polish people in their own way. It wasn’t until the end of the Cold War in the 1990s that Irena’s story became widely known.

Irena Sendler died at age 98 in 2008, but she remains a light in the darkness. Mazzeo concluded, “There’s that moment I quote at the end of the book where one of the children whose lives she saved says that Irena Sendler was the brightest star in the dark night of the Holocaust. The darkness of the Holocaust was so intense that to know that there were these people who were not saints – they’re average, flawed people like us – who decided that they would respond to barbarity with decency, that’s really the heart of that story. If you ever have a chance to go to Warsaw and visit Irena Sendler’s grave, one of the lovely things is that she’s buried in this lovely cemetery in the forest. And people go and light candles on her grave. It’s an amazing thing to see.”