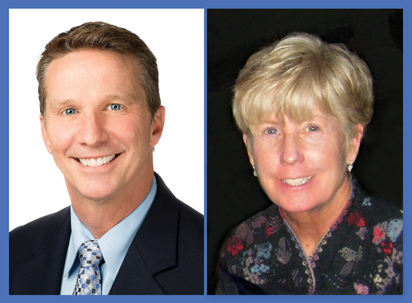 When her husband, New York City police officer Steven McDonald, was shot and paralyzed in the line of duty in 1986, Patti Ann McDonald stood by his side and supported him through challenges the couple could never have imagined when they took their wedding vows a few months earlier. Steven earned deserved praise over the years for forgiving his assailant, serving as an international peace advocate, and giving witness that life with a disability can still be filled with purpose and joy. And Patti Ann deserves a great deal of praise herself.

Steven credited her with giving him the will to live 31 years ago, so they could together raise the child she would soon give birth to: a son they named Conor. Patti Ann’s trust in God kept Steven hopeful that better times were ahead, and her modeling of sacrificial love became the rock that Steven and Conor could always lean on. In addition, after years as a Trustee of the Village of Malverne, Patti Ann was elected Mayor. She is serving her tenth year in that position. She’s also coached tennis for a local school for 12 years; and she and Steven both coached a girls’ basketball and softball team.

Steven McDonald passed on earlier this year, but the love he shared with Patti Ann remains eternal. She has become a living witness to the Christopher ideal that “It’s better to light one candle than to curse the darkness.” For that reason, The Christophers are honored to present Patti Ann McDonald with our 2017 Christopher Leadership Award.

The James Keller Award, named after The Christophers’ founder, recognizes individuals who are positively shaping the lives of children. Past winners include Special Olympics founder Eunice Kennedy Shriver.

Dr. Chuck Dietzen has been helping kids all his life, thanks to the influence of his parents who took in 150 foster children over 20 years. Regarding his mother and father, he said, “My parents didn’t preach giving and caring for others. They demonstrated it on a regular basis.” When he decided to pursue a medical career in pediatrics, his background in sports led him to physical rehabilitation as a specialty, working with disabled kids. His mission expanded more in 1997, after an encounter with Mother Teresa. From her, he learned, “Be ordinary, but have an extraordinary mission.”

That experience prompted Dr. Chuck to ask himself, “Why did God put me here?” The answer he came up with was, “I’m here to save every child I can, and do what I can to relieve suffering. But the other part of that is revealing to others that we weren’t all born to be doctors and nurses, but we were all born to be healers.” Soon after, Dr. Chuck founded Timmy Global Health, which enlists students and medical volunteers in its mission to bring healthcare to those in need around the world. The organization is named after Dr. Chuck’s brother who died a few days after birth, and it was developed as a living legacy to pediatric hospice.

Dr. Chuck has come to see his patients as “Pint-Sized Prophets,” the title of the book for which he is also winning a Christopher Award this year. He says, “I think the beauty of this work is when you allow yourself to get close enough to these kids, your heart will be broken and, at the same time, healed…They are incredible souls who were sent here to make us better, to make us more compassionate, more kind, more human.”

The Christophers, a nonprofit organization, is rooted in the Judeo-Christian tradition of service to God and humanity.  The ancient Chinese proverb —“It’s better to light one candle than to curse the darkness”— guides its publishing, radio, online and awards programs.  More information is available at www.christophers.org.