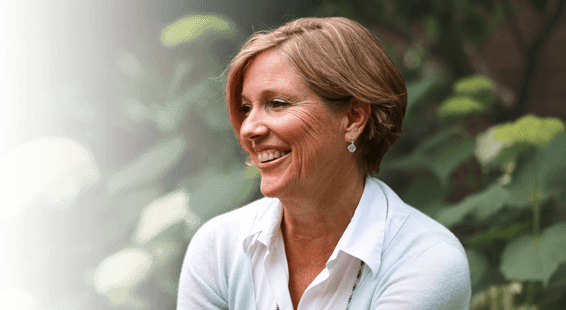 Share
Print
Tony Rossi - published on 05/15/17
Kathy Izard has made it her mission in life to provide housing for the chronically homeless in her adopted home of Charlotte, North Carolina. You could even say that she’s doing God’s work. It’s ironic since she spent much of her life doubting God’s existence since He never seemed to answer her prayers.

When Izard was growing up, those prayers primarily dealt with her mother Lindsay’s mental illness, which manifested itself in 1969, an era when these things simply weren’t discussed openly.

During a “Christopher Closeup” interview about her Christopher Award-winning memoir “The Hundred Story Home: A Journey of Homelessness, Hope, and Healing,” Izard noted that her friend’s cancer-stricken father was inundated with food and offers of support during his illness because everyone knew about it. Her family, on the other hand, had no help.

“Mental illness,” she explained, “is a very different problem. Families don’t talk about it. [They] feel somehow guilty or ashamed that this has happened, so people don’t help or don’t know how to help. I wish that was different in 2017. I think there still is the stigma to it. It’s very lonely for the patient…and the families.”

It took 16 years for doctors to correctly diagnose and treat Lindsay so she could live a relatively normal life. But the experience soured Izard on the idea of a loving, compassionate, personal God, even though she came from a long line of Presbyterian ministers and missionaries and went to church every week as a child. In fact, the way that her father John won over her mom when they were dating was by reading her the passage about faith, hope, and love from 1 Corinthians 13.

Izard said, “My father certainly demonstrated over and over that ‘the greatest of these is love.’ He was tested so many times as they were trying to understand my mother’s illness and get the right medicines and help for her. He never wavered in his faith. He didn’t waver in his love for her. For better, for worse, in sickness and in health, he certainly followed those vows. Later in his life, he had cancer, and my mother was able to provide the same for him. She was an amazing source of constant support.”

Still, Izard never felt that connection with God because of what she saw as her prayers going unanswered. She didn’t have much use for church or religion until one memorable experience after she became a parent herself. She and her four daughters had been swimming in the YMCA when they passed a portrait and her eight-year-old asked, “Mommy, who’s that?”

Izard recalled, “It was a picture of Jesus. I was horrified! I thought, ‘Oh my gosh, I’ve taken this non-religion thing too far.’ I started going back to church. That led me to volunteering for the soup kitchen and working with the homeless…Service is definitely something that my family grew up with, and then that led me back to a faith that I didn’t know I’d lost.”

That service began at Charlotte’s Urban Ministry Center, an interfaith ministry dedicated to feeding the homeless. Four thousand members from approximately 100 different houses of faith volunteer there each month, providing meals, showers, a place to do laundry, and more 365 days a year. And the people they serve are called “neighbors” instead of “clients” to create a feeling of community.

Izard admitted that she was shocked at the number of homeless who came to the Center. “We were feeding 600 people for lunch on any given day…There were men, women, children. All different ages [and] ethnicities.”

For years, Izard continued volunteering and believed she was making a positive difference in the world. But then two men named Ron Hall and Denver Moore gave her a different perspective and changed the course of her life.

Moore had been homeless for nearly 30 years when he met and befriended Hall and his wife Debbie, who were wealthy. The Halls ended up welcoming Moore into their home and family, and wrote a best-selling book about their story, called “Same Kind of Different as Me.”

Izard invited the men to come speak at a benefit for the Center. When she was giving Moore a tour of the facility, fully expecting him to praise their work, he instead asked her, “Where are the beds?”

When she answered that they were only a soup kitchen and day center, he responded, “You mean to tell me you do all this good in the day, and you lock them out to the bad at night? Does that make any sense to you?”

“No,” said a humbled and uncomfortable Izard.

Moore then challenged her: “Are you going to do something about it?”

Izard said, “It changed me. I knew that we weren’t doing enough. I didn’t know how to change it, but I knew that I couldn’t go down there and just serve soup anymore and pretend that people weren’t locked out to the bad at night.”

Izard gave up her job as a graphic designer to take a full-time position with the Urban Ministry Center and start researching how to move forward. She came upon an idea called “Housing First.” At the time, the prevailing idea was that the homeless needed to become sober or get a job before earning the right to housing. The problem was that living under a bridge in 32 degree weather and wondering where your next meal is coming from didn’t allow them to focus on anything else.

“The ‘Housing First’ philosophy,” said Izard, “started [exploring] the opposite. What if we just housed people and then worked on what they needed, whether that was sobriety or education or mental health treatment or physical wellness? That’s the way our program started. It was a ‘Homeless to Homes’ pilot program where we took 13 people who’d been chronically homeless for years in Charlotte – some as many as two decades – and we found them apartments. We moved them into housing directly off the streets, put them with a case worker and tried to work on the issues that had made them homeless. What we found out is amazing things happen when you restore people’s hope and dignity and you give them that shot.”

Izard also discovered that this approach was more financially feasible than the alternative: “When people are on the streets, they overuse jails, ER rooms, hospital beds. We did a cost analysis and it turns out the average cost of leaving a person on the street was about $40,000 a year. The cost of housing them was $13,000 a year…There’s a great economic argument, as well as a moral argument, to ‘Housing First.'”

Izard worked hard to further implement those plans. Today, the Urban Ministry Center owns and operates a facility named after Denver Moore, which offers permanent supportive housing for over 120 chronically homeless men and women. They’ve moved over 450 people off the streets and hope to build more housing.

In addition, because of her mother’s struggles, Izard helped create a “residential mental health treatment center” called Hope Way, which is giving patients with mental health disorders and their families the guidance and care they need to build a brighter future.

In the end, Izard is living up to the ideals she was taught from a young age by her family: Do good, Love well. No doubt, the homeless (and formerly homeless) of Charlotte will continue to benefit.

(To listen to my full interview with Kathy Izard, click the podcast link):