“Signed, Sealed, Delivered: The Road Less Traveled” explores loving your neighbor as yourself 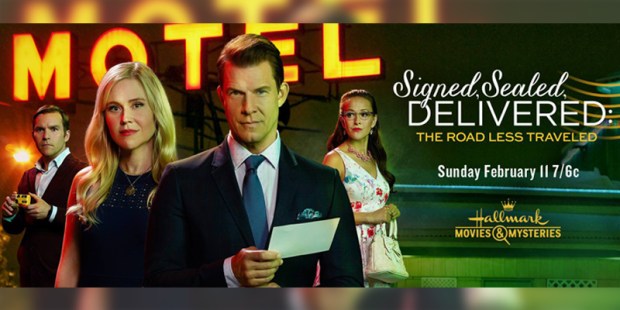 Crown Media Promotional Image
Share
Print
Tony Rossi - published on 02/07/18
What do poofy 80’s hair, a disposable camera, and loving your neighbor as yourself have in common?

They all play an integral role in the newest “Signed, Sealed, Delivered” movie “The Road Less Traveled,” premiering Sunday Feb. 11 at 7/6C on Hallmark Movies and Mysteries. And the mysteries don’t just involve the Postables trying to find the owner of an old-fashioned camera that arrives with an illegible address, but also secrets they’ve been concealing about their own lives and are afraid to share.

Over the last few years, the bond of friendship between all these quirky characters (and the actors who play them) has flourished. In addition, romance blossomed between the now-engaged Rita and Norman, and the now-dating Shane and Oliver. The “will they or won’t they get together” tension has run its course, with both couples firmly committed to each other. But that doesn’t mean new challenges don’t arise as they set off on a road trip to find the owner of the aforementioned camera.

“The Road Less Traveled” takes viewers on a slight detour from the usual “dead letter” approach. This time, it’s the photos on the camera that serve as puzzle pieces for the Postables to follow on a scavenger hunt of sorts. They deduce that a young boy is looking to reconnect with his father. But is the woman he’s with (Jamie-Lynn Sigler) his mother? Is he a victim of child abduction? Are the two of them escaping from an abusive situation? Or is something else altogether going on?

This is the motivation for the Postables to hop in the RV that Rita’s parents gave her and Norman as a pre-wedding gift and search for answers, all while dealing with wedding plans.

Their journey, replete with a series of owl figurines on the RV dashboard, makes for some lighthearted camaraderie and serious bonding, along with a stop at a diner where the sign “Love thy neighbor as thy self” reflects a recurring theme, but not always in the obvious way.

From a character standpoint, Shane may have evolved the most as “Road Less Traveled” begins. There is a lightness to her when she’s around Oliver that I don’t recall from earlier movies. She’s finally let the walls she built around herself down to welcome Oliver into her life, and the result is joy. As she says to someone near the end of the movie, “He’s everything I never knew I wanted.”

On top of that, Shane has always been a skeptic when it comes to God. But Oliver’s faith – and everything she’s experienced while working at the DLO – have led her to believe there is more to this world and life than meets the eye.

When the Postables meet obstacles to figuring out the boy’s real story, it’s Shane who suggests there is a bigger plan going on and they simply have to “trust the timing,” a phrase she picked up from Oliver. And when one lead seemingly falls through, Shane says they need to “pray” for another one.

Faith is often passed on through the example of good people. Shane’s spiritual journey reflects that truth.

Oliver remains his buttoned-up self, but a far more relaxed version than he used to be. After a bad experience with love (or what he thought at the time was love) in his past, he, too, is now open to the real thing. He is falling in love with Shane because of who she is, not who he imagines her to be. He struggles with some trust issues regarding Shane because of some mysterious text messages she’s receiving, but manages to nip his bad behavior in the bud before it ruins their budding romance.

Oliver also continues to be a link to the good things of the past, criticizing (though not in these words) what C.S. Lewis called “chronological snobbery” – the belief that something in the present is always superior to something from the past.

In this case, Oliver compares old film cameras to the newer digital ones on phones, saying, “In our world of instant gratification and countless redos, there is something truly satisfying about not being able to hit ‘Delete’ in favor of another photo with better lighting or a more perfect smile. Sometimes it’s the imperfections in life that make something perfect.”

That, of course, is not just a comment on cameras, but on life. Striving to be better is generally a good thing, but the goal to be superficially perfect in the eyes of the world often just leads to heartache.

That’s certainly what Norman is experiencing in “Road Less Traveled.” When the conversation at one point turns to him and Rita having kids, he becomes uncomfortable, but doesn’t immediately explain why.

Later, Norman reveals to Rita that he would prefer to adopt because he is afraid that his biological children would be odd like him and get made fun of and bullied.

Norman makes himself extremely vulnerable here, revealing the depth of his self-doubt – and even a touch of self-loathing. It’s ironic that someone who is so good at loving his neighbor has trouble loving himself.

But this is where Rita steps in, re-enforcing the lesson that “sometimes it’s the imperfections in life that make something perfect.”

She affirms that he is perfect just the way he is and that the kids who belittled him in his youth “could only see the different; they couldn’t see the amazing.” She then reminds him that he is a great and loving person who she wants all of their kids, whether adopted or biological, to be like.

“You’re safe now, Norman,” she assures him. “It just took a little longer for you to be appreciated.”

Lowe and Gustafson shine in this scene, thanks to their own talents, script writer Brandi Harkonen, and series creator/executive producer Martha Williamson.

One of the strengths of “Signed, Sealed, Delivered” stories – evidenced again in this entry – is the empowerment of women without diminishing men. Rita, for instance, is there to lift Norman up regarding his doubts about himself – and she doesn’t think any less of him because of those doubts. She listens to him and understands where he’s coming from, but affirms his inner goodness and strength.

And Norman’s doubts don’t mean he is weak, but rather that he experiences moments of weakness, just as we all do. He isn’t a macho chest-thumper, but he is a good man who always strives to do right by others, a man who knows how to love selflessly.

In terms of the show’s other couple, it’s Shane who struggles with feelings of unforgiveness toward someone who did her wrong in the past, while Oliver encourages and supports her toward the healing power of mercy.

For the Postables, it’s never about men or women wielding power over each other, but rather each person helping the other when they’re down – which is how it’s supposed to be in life.

So why exactly is this movie called “The Road Less Traveled”? It’s possible that it’s a take on Robert Frost’s poem “The Road Not Taken” or a reference to M. Scott Peck’s best-seller of the same name. Though I’ve only read excerpts, I know it deals with some of the same themes Williamson covers in SSD: responsibility, truth, God, love, and grace.

This quote from Peck’s book, especially, reminds me of the Postables: “When we love someone our love becomes demonstrable or real only through our exertion – through the fact that for that someone (or for ourself) we take an extra step or walk an extra mile. Love is not effortless. To the contrary, love is effortful.”

Watching “Signed, Sealed, Delivered: The Road Less Traveled” shouldn’t take much effort at all: just sit on your couch or program your DVR for Sunday Feb. 11 at 7/6C on Hallmark Movies and Mysteries.

It’s another entertaining story from the mind of Martha Williamson, the pen of Brandi Harkonen, and the acting talents of Mabius, Booth, Lowe, and Gustafson. They have made the Postables examples of how to do relationships right and truly love our neighbors as ourselves. That sounds like a great way to spend two hours to me.