A New Deacon’s Ordination Impressions: “This Time, I Was the One Wearing the White Dress…” 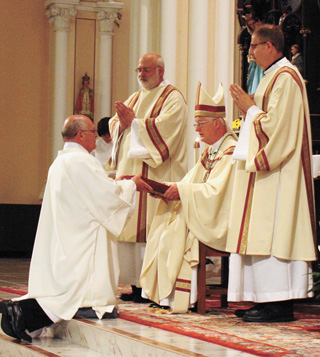 The Catholic Messenger this week has write-ups about the 14 newly ordained deacons in the Diocese of Davenport.

There’s full coverage of the ordination itself — and reflections from the new deacons, including this from Deacon Bob Glaser:

“I had two siblings and two in-laws in their 80s. I was worried about them getting here. I broke into tears when I saw them … I’m feeling terribly blessed.” For the past week he’d been wondering whether he was worthy of being a deacon. “I feel called; I have felt called to do this all along. I’m still not sure I feel worthy. It is emotional.” On Sunday, Glaser and his wife LuAnn renewed their wedding vows in honor of their 40th wedding anniversary, which they celebrated last month. “This time, I was the one wearing the white dress,” Deacon Glaser joked.

Highlights are below, in a YouTube video that captured most of the ordination.  (I like how they handle the vesting, with wives/family members bringing the dalmatics and stoles to the priests or deacons who will complete the vesting.) Congratulations again, brothers!