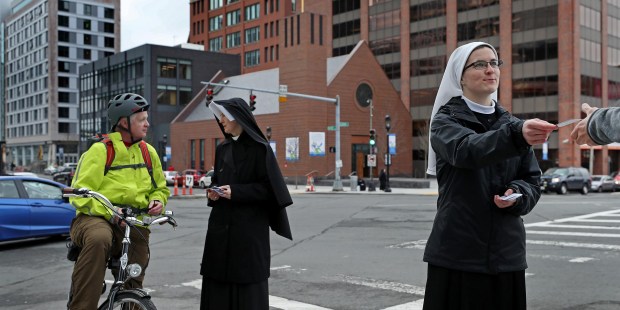 The Archdiocese of Boston has been closing churches in the city for much of the past 13 years, especially in old ethnic enclaves in South Boston, East Boston, and the South End. On Sunday, it will open a brand new Roman Catholic church in the city for the first time in more than 60 years.

Our Lady of Good Voyage Shrine stands on Seaport Boulevard just over the Evelyn Moakley Bridge from downtown at the gateway of the Seaport District, a neighborhood that best represents the city’s high-tech future.

“We have the best location you can imagine,” said the Rev. James Flavin, episcopal vicar of the archdiocese’s central region. “When you come over the bridge, we’re the first building you see.”

The angular brick structure — which incorporates nautical flourishes as testament to its seaside location — stands as a kind of triumph for the Catholic Church, its profile diminished significantly in recent years because of the priest sexual abuse crisis and an increasingly secular culture. Though dwarfed by the sleek glass and steel buildings nearby, Our Lady of Good Voyage is nevertheless highly visible; the 14-foot thin gold cross on its bell tower seems almost suspended in the air.

The archdiocese sees the new 250-seat shrine as an invaluable tool for promoting the church as a place to find respite from the rush of modern life and for building community in a neighborhood where the richest and poorest pass one another on the street but rarely meet socially. Millennial up-and-comers and empty nesters live in the luxury condos; workers, many of them immigrants who live just north of the city, clean the rooms and prepare the food in the fancy hotels and restaurants; tourists visit from around the world.