Albany ordinations mark for some “a second career”

From The Troy Record, a welcome reminder that vocations come from many places, but very often begin in the family: 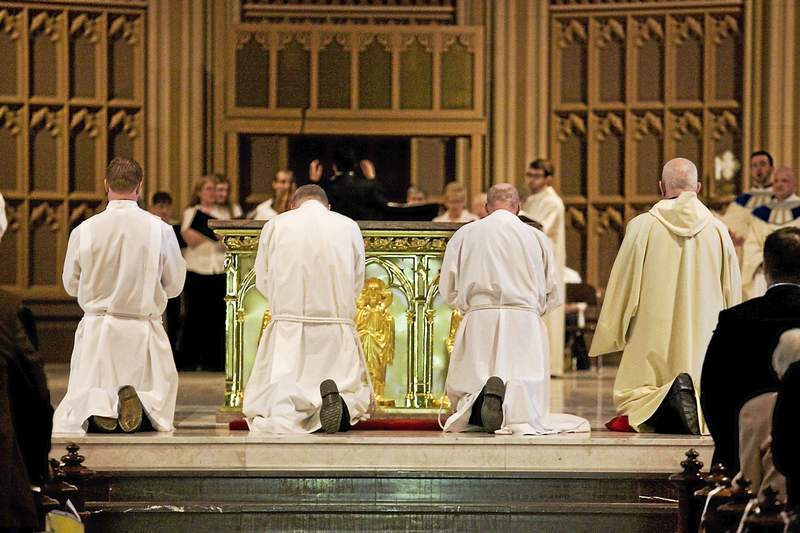 This ceremony, celebrated by Bishop Edward B. Scharfenberger, was held at the Cathedral of the Immaculate Conception in Albany. In his homily, Bishop Scharfenberger said those committed in this way to Jesus Christ are “putting ourselves in the Lord’s hands as servants.” The one man ordained as a permanent deacon, Frank Garceau of Latham, has stated that love is the overriding factor in what has brought him to this greater embrace of the Church. In his words, “My greatest inspiration and source of spiritual, as well as physical strength, is my wife of 29 years, Kathy, who has taught me how to love God fully by the example of her words and deeds towards others.”

This detail about one of the future priests jumped out at me:

The youngest new deacon in line for the priesthood, Brian Kelly, 33, of Latham, beginning in his teen years, took a very active and later leadership role in parish life… …His discernment was strongly influenced by the fact that his grandfather and father both went to seminary to study for the priesthood. “Obviously having decided it wasn’t their vocation, they brought their faith into our families, helping us to grow up with and lead faith oriented lives,” Kelly said. In addition, his uncle Richard, his first godfather, was a priest. After his death, Kelly’s second godfather, Rev. Arthur Becker, basically adopted him as another godson. “I got to see firsthand all that a priest does for the community and when he was dying, the result of his influence, love and concern for the faithful was returned as they went above and beyond to help him.”

And there’s this, about another new deacon, Patrick Rice, who will be ordained a priest in his 50′s:

He credits his parents as being influential regarding following a faith-filled life. His father was a permanent deacon in the parish where he grew up in New Jersey. As for his own decision to study for the priesthood, he said, “I just felt there was something missing in my life and realized when I entered the church doors I felt a sense of peace come over me and felt that was what was missing and knew then that I was being called.”