Bach to the future: a musical visit to New York’s first cathedral 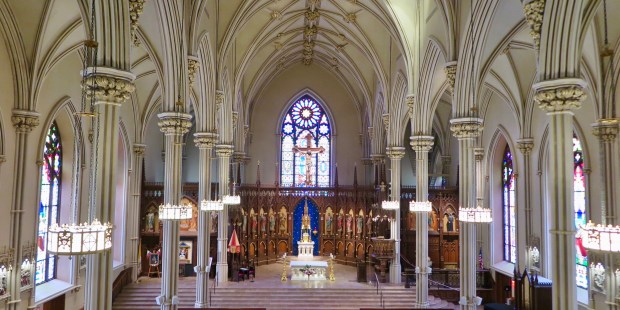 Share
Print
Deacon Greg Kandra - published on 02/10/18
Friday, I had the privilege of visiting New York City’s first cathedral, the original St. Patrick’s—now known as the Basilica of St. Patrick’s Old Cathedral. The cathedral is raising funds to restore its historic Henry Erben organ—a true piece of American Catholic history which CBS News dubbed “one of the most important historic instruments in the nation.”

I was delighted to receive a tour of the church by Anne Riccitelli and a mini-concert by the church’s music director Jared Lamenzo.

Martin Scorsese is leading the effort to restore the instrument—he grew up in the neighborhood, was an altar boy at St. Patrick’s, and credits the church and its priests with literally saving his life and keeping him out of trouble and off the streets. (Film buffs should know: the baptistry of the church is where Francis Ford Coppola filmed the famously violent baptism scene in “The Godfather.” One of the parish’s most prominent members—and an EMHC these days—is Jim Gaffigan.)

As the literature for the Friends of the Erben Organ puts it:

The 1868 Erben organ is a living artisitic and technological masterpiece. It represents the finest extant work of New York City organ builder Henry Erben (1800-1884). Erben was the leading Aemrican pipe organ builder in the mid-19th century, and was never surpassed in quality and craftsmanship.

In the words of Scorsese: “Why preserve this glorious instrument? Because it is unique and irreplaceable. Listening to the transcendent sound of this 19th century American masterpiece will take us where we need to be.”

Jared eagerly showed me the inner workings of this amazing instrument—the ancient bellows and pipes that somehow create its rich sound.

What is that sound? Listen for yourself. (Listen closely and you can hear his feet working the pedals, too.)

Meanwhile, there are other noteworthy details of this historic church.

Anne pointed out a recently-donated statue of Our Lady of China—a gift from the growing Chinese community in the parish. It depicts the Madonna and Child as Asian.

But step outside and you can’t miss an important piece of history: the wall surrounding the property, which was erected in the early 19th century to protect the church (and the faithful inside) from the anti-Catholic violence of the “Know-Nothings.”

Much of the wall has been restored and repaired—a few years ago, it was in danger of collapse—but before then it was still possible to see and touch bullet holes.

In 1836, the cathedral was the subject of an attempted sack after tensions between Irish Catholics and anti-Catholic Know-Nothing nativists led to a number of riots and other physical confrontations. The situation worsened when a brain-injured young woman, Maria Monk, wrote a book telling her “true” story – a Protestant girl who converted to Catholicism, and was then allegedly forced by nuns to have sex with priests, with the resulting children being baptized then killed horribly. Despite the book being debunked by a mildly anti-Catholic magazine editor, nativist anger at the story resulted in a decision to attack the cathedral. Loopholes were cut in the church’s outer walls, which had just recently been built, and the building was defended from the rioters with muskets.

I’m thrilled that I got to see the cathedral and touch a part of Catholic history— and hear that amazing organ.

My thanks to Jared and Anne for making it possible. If you’d like to support this worthy effort, and help keep this vital part of our American Catholic heritage alive, please visit the Friends of the Erben Organ website.