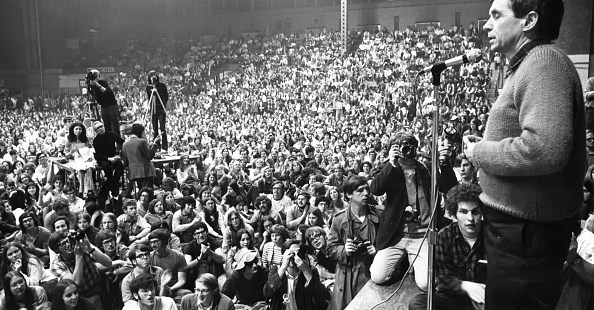 ITHACA, NY - CIRCA 1970: Daniel Berrigan at Cornell University circa 1970 in Ithaca, New York. (Photo by PL Gould/IMAGES/Getty Images)
Share
Print
Deacon Greg Kandra - published on 05/01/16
Back in 1972, the poet laureate of Forest Hills, Paul Simon, wrote a song about two young guys who got into trouble and ended up in prison, “Me and Julio Down by the Schoolyard.”

He described what happened:

“A radical priest come and get me released / and we was all on the cover of Newsweek.”

The “radical priest” was a reference to one of the most complicated and controversial figures of the time, Fr. Daniel Berrigan.  Last night came word that Fr. Berrigan had died at a Jesuit infirmary in the Bronx. He was 94.

It’s fitting, I think, that he died on the 41st anniversary of the end of the Vietnam War—and fitting, too, that this Sunday, the day after his passing, we encounter this gospel whose central message is one of peace.

Many, I know, have never heard of Daniel Berrigan.  It’s hard to capture just what he meant to a particular generation of Catholics, at a particular moment in time.But I think attention must be paid. He was a priest, a pacifist, a poet—but that’s just the beginning.

To some he was a prophet; to others, a criminal. At the height of the Vietnam War, he inspired countless young Americans, Catholic and non-Catholic, to protest.

The New York Times obituary this morning described him this way:

“An intellectual star of the Roman Catholic ‘new left,’ articulating a view that racism and poverty, militarism and capitalist greed were interconnected pieces of the same big problem: an unjust society.”

I should point out: there’s a lot of both his methods and his message that are, to put it politely, problematic. As I mentioned: Berrigan was a complicated man. He was often abrasive and harshly critical of the hierarchy.

Daniel Berrigan was not only radical; he was revolutionary and reactionary. He defiantly broke the law —most infamously, burning draft records as part of the notorious “Catonsville 9.” For a time, he went underground and became one of the FBI’s 10 Most Wanted. He was later arrested and spent time in jail; his Jesuit superior, Fr. Pedro Arupe, visited him behind bars.

But even his critics admired his fervor. Twenty years ago, Fr. J. Richard Neuhaus—a former liberal Lutheran who became a leading voice of conservative Catholics—described him in an interview as “remarkable… a most devout person and a devoted priest.”

On top of all this, it’s worth noting that Fr. Berrigan was also vigorously pro-life, in the best sense — anti-abortion, anti-death penalty, anti-euthanasia and anti-war.

He believed, as he put it, “If enough Christians follow the gospel, you can bring the state to its knees.”

When asked, he once said that his epitaph should read: “It was never dull. Alleluia.”

Whether you loved him or hated him, it could not be denied that Daniel Berrigan walked the walk.

Dorothy Day wrote to him in 1972:  “Thank God, you are truly bearing the Cross, giving your life for others…”

He bore the cross, and stood up again and again for what he believed in, for a simple reason: because he cared deeply about the words of today’s gospel:

“Peace I leave with you, my peace I give to you…”

For Berrigan, it all came down to peace, and he made clear: he followed the Prince of Peace.

This speech of Jesus in the gospel reinforces the first word Jesus spoke to his followers after the Resurrection in the Upper Room:

Peace is Christ’s gift, his benediction. It is almost a prerequisite for being his follower. It is so important, in fact, we will share a sign of that gift with one another just before we receive Christ in communion.

Today in this same passage, Jesus reminds his followers: “Whoever loves me will keep my word.”

It is a measure of how much Daniel Berrigan loved Christ that he fought so hard to keep that word, and to spread it.

For all his strengths and weaknesses—and they were considerable—I think we need men like Fr. Berrigan to challenge our thinking and remind us of this unshakable fact:

Being a Christian, in fact, is radical.

In a world consumed with death, we believe in defending life.

In a world obsessed with wealth, we believe in embracing the poor.

In a world that is often merciless, we believe in mercy.

In a world that seems intent on perpetually waging war, we believe in peace.

And we believe in a God who told us peacemakers are blessed.

But we also believe that Christianity isn’t supposed to be easy or comfortable.

It was something Daniel Berrigan understood. And he reminded people that following Christ comes with a cost.

“If you want to follow Jesus,” he once said, “you better look good on wood.”

It’s a radical thought from the man Paul Simon called a “radical priest,” but maybe it’s one we need to remember, especially in these final days of the Easter season. While we celebrate new life and hope and the Resurrection, we cannot forget that our faith is rooted in wood, and nails, and thorns. It demands sacrifice.

Our call as Catholic Christians is to live as radical people by doing this radical act: living the Gospel—and carrying its message into the world.

Daniel Berrigan did that in an extreme, even explosive way.

But then again, so did Jesus Christ.

Periodically, I think, we need to be jolted by people like Daniel Berrigan and ask ourselves:

Do we have the courage of our convictions?

How far are we willing to go for the Gospel?

How far are we willing to go for Christ?