Big news: Blessed Paul VI will soon be St. Paul VI, as another miracle is confirmed 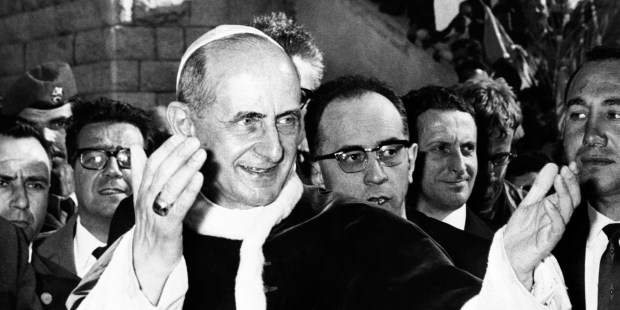 EPU FILES I AFP
Share
Print
Deacon Greg Kandra - published on 02/07/18
Tellingly, the miracles attributed to the pope known for his encyclical about birth control both involve the healing of unborn children during difficult pregnancies.

A baby in the fifth month of pregnancy being carried by a mother who had a disease that put the life of both of them at risk was born in good health and is now a healthy, growing girl — and her miraculous life is attributed to the prayers of Paul VI.

The recognition of the miracle was unanimously approved today by the Congregation for Saints’ Causes, meaning that Blessed Paul VI is now set for canonization, Vatican Insider reported. The only thing left is for Pope Francis to choose a date for the ceremony.

Paul VI’s landmark encyclical, Humanae Vitae, which explains the Church’s opposition to artificial birth control, was released 50 years ago, on July 25, 1968. That could be a date for his canonization.

The miracle approved for the beatification of Pope Paul VI (Giovanni Battista Montini) was also related to a difficult pregnancy.

Lest we forget: Paul VI was also the pope who restored the diaconate as a permanent order in the Latin Church with his motu proprio Sacrum Diaconatus Ordinem in 1967. Every permanent deacon ministering in the Church today, in every corner of the world, is able to do so because of his vision and courage.