Billy Graham on the approach of death: ‘You cannot count your days, but you can make your days count’ 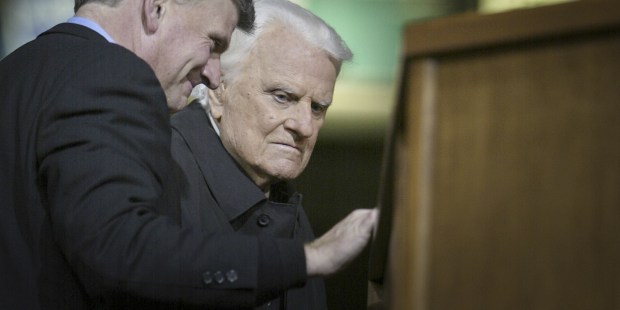 ROBYN BECK / AFP
Reverend Billy Graham, using a walker, is helped to the pulpit, at the Rose Bowl in Pasadena, California, 18 November 2004 on the first day of the four-day Greater Los Angeles Billy Graham Crusade. The 86-year-old, internationally-known evangelist is brining his message of salvation to Christians on what may be one of his last crusades.
Share
Print
Deacon Greg Kandra - published on 02/21/18
Great wisdom from a great Christian, who entered eternal life today at the age of 99:

When Billy Graham preached, he said that death was, of course, inevitable. As no one knew when Christ would return, he said, everyone should think instead about the sure thing they did know: the certainty of their own death. While some fundamentalists predicted that some believers would escape death in the Rapture, the evangelist repeatedly insisted that death fell on everyone.

In his remarks at former president Richard Nixon’s funeral, Graham reminded the family and audience that someday every one of them would die: ”John Donne said that there’s a democracy about death. ‘It comes equally to us all and makes us all equal when it comes.’ ”

…Death was one thing; the passing of time in the midst of life, another. Once, when he was in his mid-60s, a teenager asked him what surprised him most in his “old age.” He answered without hesitation: “the brevity of life.”

The relentless march of events taught important lessons, too. “I urge each of you to invest your lives, not just spend them,” he told another group of young people. “Each of us is given the exact same amount of seconds, minutes and hours per day as anyone else. The difference is how we redeem [them]. … You cannot count your days, but you can make your days count.” A good life and a good time were not the same.

Of course it was natural to fear death. Everyone did. But facing it squarely put life in a longer perspective. “The future is as bright as the promises of God,” he assured the faithful at the opening ceremony of his North Carolina retreat center, the Cove, in 1993.

What about thoughts on his own death? Until the later decades of his ministry, Graham seemed not to dwell very much on the subject. For one thing, he proved consistently outwardly focused. That outward orientation fostered a perennially sunny disposition, especially in public. “I don’t have many sad days,” he told Larry King.