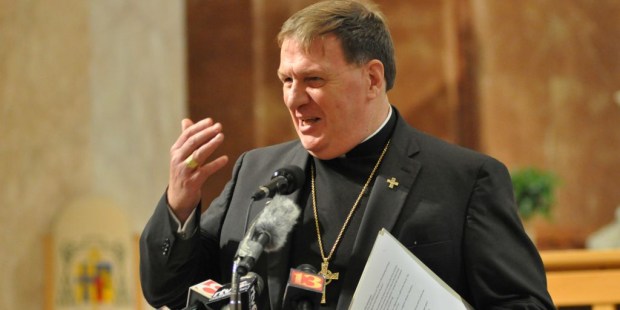 Share
Print
Deacon Greg Kandra - published on 06/13/17
An account of a recent Mass, via The New York Times:

The word “pilgrimage” usually evokes visions of far-off, exotic places, but for some 100 gay and lesbian Catholics and their families, a pilgrimage to the Cathedral Basilica of the Sacred Heart here on a recent Sunday was more like a homecoming.

The doors to the cathedral were opened to them, and they were welcomed personally by the leader of the Archdiocese of Newark, Cardinal Joseph W. Tobin. They were seated on folding chairs at the cathedral’s center, in front of the altar in the towering sanctuary, under the blue-tinted glow of stained glass.

The welcoming of a group of openly gay people to Mass by a leader of Cardinal Tobin’s standing in the Roman Catholic Church in this country would have been unthinkable even five years ago. But Cardinal Tobin, whom Pope Francis appointed to Newark last year, is among a small but growing group of bishops changing how the American church relates to its gay members. They are seeking to be more inclusive and signaling to subordinate priests that they should do the same.