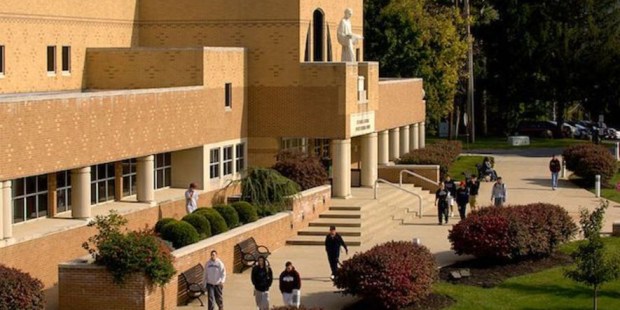 Alvernia University and its athletic program officially change their nickname to the Golden Wolves.

“What is most extraordinary about this announcement is the overwhelming support and consensus that emerged from across the university community regarding the selection of the new nickname,” said Thomas F. Flynn, president. “Throughout this very inclusive process, the university community consistently emphasized the importance of having our new nickname be directly connected to our distinctive Franciscan heritage.”

According to the iconic Wolf of Gubbio story, St. Francis of Assisi tamed a wolf that had been terrorizing the city in the early 13th Century. The story symbolizes the power of peacemaking. Adding ‘golden’ to the name represents excellence and highlights one of the university’s traditional colors. And, Alvernia’s initials, AU, are the scientific symbol for gold. The school colors, maroon and gold, remain unchanged.

In March, a university task force was appointed to develop new name options. Representing students, faculty, athletic and other staff, alumni, parents, trustees and Bernardine Sisters, the task force invited and received hundreds of submissions from the university community with more than one-third suggesting variations of “wolves.”

Golden Wolves replaces the former name, Crusaders, which had been in use since the late 1970s when Alvernia launched its intercollegiate athletic program. Moving forward as the Golden Wolves, the university will unveil a new athletics visual identity in August and a new mascot in October, just in time for homecoming.

Alvernia University is recognized nationally as a student-centered “Distinctive Franciscan University,” part of the proud tradition of Catholic higher education. Since its founding in 1958, the Alvernia community has been inspired by messages of St. Francis, who was a prophetic voice for unity, inclusion and peacemaking.

A report in March underscored the controversy surrounding the mascot name:

“As at other schools with the same nickname, some at Alvernia have viewed ‘Crusaders’ as expressing commitment to and passion for a cause. In that regard, the name correlates with a positive, competitive image for athletics,” the school said in a press release, the College Fix reported. “On the other hand, many others have found the name ‘Crusaders’ troublesome, even offensive. Even more important, they view the image as opposed to the peace and harmony of ‘right relationships’ modeled by St. Francis and the spirit of inclusiveness for which Franciscans strive.”