Christians and Muslims join together to rebuild monastery 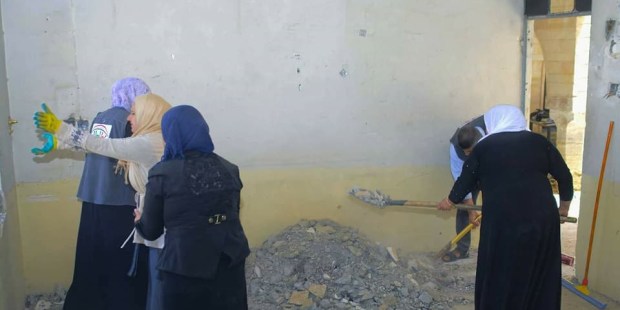 As government forces pry apart the Islamic State’s three yearlong grip on Mosul, Muslims and Christians have united to rebuild a damaged monastery.

A Facebook page called “This is Christian Iraq” – dedicated to connecting Iraqi Christians and maintaining the faith amid ISIS threat – recently posted a series of photos showing the joint effort.

The May 27 post said that young Muslims from the northern neighborhood joined Christians at the Monastery of Saint George, participating in cleaning and repairs.

The monastery belongs to the Chaldean Catholic tradition, an Eastern Catholic rite in full communion with the Vatican. ISIS militants vandalized the monastery – smashing windows, damaging the church’s dome, and discarding its cross.

Although still in need of repairs, the17th century monastery gathered Chaldeans for Easter celebration this year, according to the Irish Times.

“God willing, the celebration of the resurrection of Christ will also mark the return and rising-up of the Christians in Iraq,” Kyriacos Isho, an attendee of the service, told the newspaper.

A new cross has now replaced the old one, and the coming together of Christians and Muslims marks a promising time for both religions as reports announce a final push against the Islamic terrorists.