Crisis: Churches Cancel Christmas in India After Worst Flooding in a Century 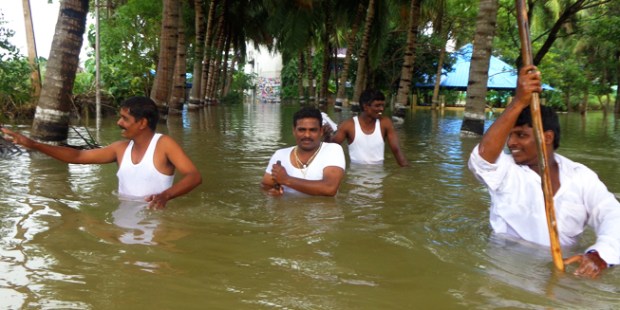 Catholic churches in the southern Indian state of Tamil Nadu are canceling Christmas in order to divert funds to help victims of flooding in Chennai – the worst in more than a century that are being blamed on climate change.

Dozens were killed and thousands were left homeless as Chennai – the fifth most populous city in India – suffered the worst November for rainfall in more than 20 years and the wettest December day in over a century when more than 12 inches fell on 1 December.

India’s Environment Minister Prakash Javadekar linked the disaster to climate change saying that it was an indirect result of 150 years of intense industrialization by Western countries.

“What is happening in Chennai is the result of what has happened for 150 years in the developed world. That is what has caused 0.8 degrees Celsius temperature rise. And therefore they must now take action more vigorously,” Mr Javadekar told The Hindu newspaper.

The Catholic church in India has called countrywide support for its relief work and the church in Chennai has pledged to forgo Christmas festivities.

“The need of the hour calls us to express solidarity with the flood affected suffering families and communities and to contribute our mite for their relief and rehabilitation,” Cardinal Baselios mar Cleemis, president of the Catholic Bishops’ Conference of India (CBCI) said in an appeal on 7 December.

Across Tamil Nadu state more than 270 people lost their lives in the floods and the flood waters reached so high that the region was cut off from the outside world when the runways at Chennai airport were submerged in five feet of water.

To support the people of flood-ravaged India, visit the website for Caritas India. And remember these struggling people in your prayers.