Dare to be something more: Homily for All Saints Day 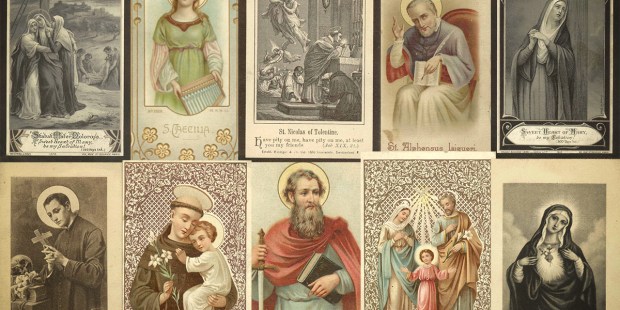 This gospel, the Beatitudes, may be one of the most familiar in all of scripture. Its litany of what it means to be “blessed” can be seen as the ultimate blueprint for living the Christian life.

In the context of today’s feast, it tells us: this is how you become a saint.

But do we really understand what that means? As we mark this All Saints Day, it is tempting to put saints, literally, on a pedestal.  Just look around this church.  We see saints in stained glass, in wood, in marble. They are plaster figures we put on a shelf and decorate with flowers or adorn with halos.  We collect them in holy cards and venerate them in icons.

But to think of the saints that way reduces them to something merely decorative—and risks making this feast seem unnecessary.

This day is necessary.  We need to hear what this feast says to us. It is a summons, a call, a challenge to every one of us who is here.  Looked at another way: All Saints Day is nothing less than a dare.

This feast says to us: dare to be more.

Dare to be a saint.

Some of us may hear that and laugh. Sainthood is a noble ambition, an ideal, but is this something we can realistically expect to attain?

The short answer is: yes.

Because the great truth about saints, something we so easily forget, is that they were just like us.

Flesh and blood, strength and weakness.  They were people of appetites and longings, ambitions and disappointments, vanities and eccentricities. They were simple sinners just like the rest of us.

That was how they began.  But that wasn’t the whole story.

The simple but reassuring fact is that nobody is born a saint. It’s something you have to become.

Consider St. Margaret of Cortona. As a teenager, she was the mistress of a young nobleman. She lived with him for nine years, even had a son with him, hoping at some point her lover would marry her. He never did. When he was finally murdered, the shock caused Margaret to re-evaluate her life. She went on to take vows a Franciscan. Her son also joined the order.  She was canonized in 1728.

Nobody is born a saint.  It’s something you have to become.

Sometimes those who become saints aren’t the ones we expect. They may be the filthy, the rejected, the outcast, the homeless. People like Benedict Joseph Labre.

He grew up the son of a prosperous shopkeeper, but felt called to give up everything and follow Christ. He spent his life wandering from church to church in Rome. He rarely bathed, never washed his clothes. Some people were repelled by him. But the purity of his devotion and his love of God moved and inspired those who saw him day after day. When he died at the young age of 35, priests of Rome preserved his filthy clothes as relics and they buried him in one of the churches he loved.  Today, he is the patron saint of the homeless.

Nobody is born a saint. It’s something you have to become.

In the 1920s, if you had to pick a woman who was the least likely candidate for sainthood, it would probably have been an anarchist and communist from Brooklyn named Dorothy Day. She worked as a journalist and spent many nights drinking with famous writers like Hart Crane and Eugene O’Neill. She had an abortion, and a brief marriage, before finally being drawn to Christ, and the gospel, and converting to Catholicism. Her conversion led her to embark on a radical ministry to the poor, one that is still changing the world. She’s now a candidate for sainthood.  Late in her life, people called her a living saint.  “Don’t call me a saint,” she once said.  “I don’t want to be dismissed that easily.”

Don’t dismiss any of the saints. They are closer to us than we may realize. They have struggled with sin and temptation, they’ve walked the journey toward holiness, sometimes stumbling, sometimes falling, but always getting back up and moving on, resolving to do better, to be better, to aim higher.

They worked to be what this gospel is calling us to be.  To be poor in spirit.  To be meek.  To be merciful.  To make peace.  This is how we begin to become what Jesus called “blessed,” and what the Church calls saints.

It’s a tall order. And it is nothing less than a call to greatness.  But this feast day reminds us, whether we realize it or not: it can be ours. This kind of greatness is within our grasp.

All Saints Day beckons us to something beautiful.  It reminds us of our great potential—the promise that lies within each of us. The promise of holiness.

It is the promise that was fulfilled in the countless people we venerate this day—our models, our companions, our inspirations, our guides. All the saints. They give us blessed hope.

Because they assure us again and again: no one is born a saint.

But every one of us, by the grace of God, can become one.