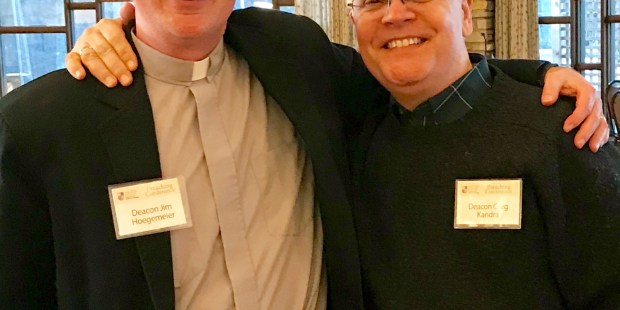 Share
Print
Deacon Greg Kandra - published on 02/03/18
So pleased to see this great write-up about my old friend Deacon Jim Hoegemeier from Madison, Wisconsin (that image is from last month, when he attended a talk I gave at the Sacred Heart Seminary outside Milwaukee).

Rain or shine, life is precious and a gift from God.

More than 500 people were probably reflecting on that as they marched from St. Patrick Church in Madison to the Wisconsin Capitol Jan. 22 — the 45th anniversary of the U.S. Supreme Court’s Roe v. Wade decision to legalize abortion at all stages of pregnancy in all 50 states.

Sponsored by the Diocese of Madison, the event was the first of its kind in about 20 years in Madison and was one of many held around the country, including in Washington, to mark the 1973 decision.

“It’s important (to march for life) because it’s exactly what God calls us to do,” said Deacon Jim Hoegemeier, associate director of Madison’s diocesan Apostolate for Persons with Disabilities.

“What we’re called to do is be that model that other people can follow,” he said. “What more important is there than life? That’s why Christ came, to give us life. … We’re marching to basically fulfill what God calls each one of us to do and who to be.”