Deacons can’t cope: coming changes to the Rite of Marriage 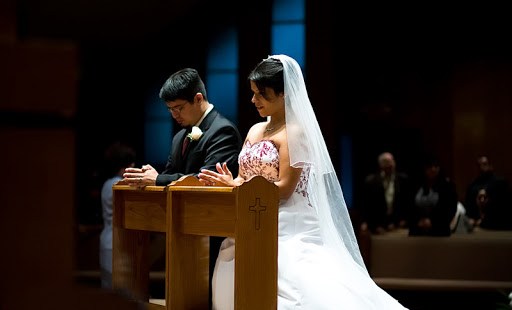 Christine Tremoulet
Share
Print
Deacon Greg Kandra | Oct 16, 2016
While a few people have been writing about changes coming to the Rite of Marriage — becoming mandatory on December 30, 2016, the Feast of the Holy Family—not much attention has been given to how this will be impacting the deacon.

A few changes are worth noting—beginning with the vestments.

Describing the rite for celebrating marriage outside Mass, the old rubrics said:

At the appointed time, the priest, wearing surplice and white stole (or white cope, if desired), proceeds with the ministers to the door of the church or, if more suitable, to the altar.

At the appointed time, the Priest, wearing an alb or surplice, a white or festive stole, and even a cope (or a dalmatic for a Deacon) of the same color, goes with the servers to the place prepared for the couple.

That indicates, clearly, that the particular vestment for the deacon during this form of the rite is a dalmatic. To paraphrase Edna in “The Incredibles”: “No copes!” (With a revised baptism rite expected in the next year or two, I wonder if that will also prescribe who may or may not wear the cope for baptisms…?)

Secondly, the rite specifies who will preach the homily during a Nuptial Mass:

After the reading of the Gospel, the Priest in the Homily uses the sacred text to expound the mystery of Christian marriage…

Can the deacon preach at a Nuptial Mass?  It doesn’t say he can’t. But the language above only mentions the priest giving the homily; the author(s) could have included the deacon, but didn’t.

Likewise, in a Nuptial Mass, the new form of the rite makes explicit that it is the priest who asks the questions of consent, presides over the exchange of vows and blesses the rings.  (The Rev. John O’Connor, the liturgist for the Diocese of Brooklyn, said that the implication here is that the priest celebrant does all of this—and that even priest con-celebrants are not supposed to divide up different functions during a Nuptial Mass.)

There are a number of other significant changes to the liturgy itself worth noting—among other things, the “Gloria” is to become standard during the Nuptial Mass, even during Lent, and the rubrics now require that at least one of the readings mentions, explicitly, marriage (not merely love, for example, so if you choose the famous reading from Corinthians, you need to pick another reading that is all about marriage, too). Also, the Nuptial Blessing is to be given to the couple while they are kneeling.

Finally: there is no mention, at all, of incorporating the “unity candle” into the ritual.

Check out more on the coming changes at the link above.  A more comprehensive and detailed overview can also be found here.

And keep your diocesan liturgy office on speed dial.

UPDATE: Another significant shift — which is not tied directly to the new rite—is the role of the deacon in weddings between Latin-rite Catholics and Eastern Catholics or Orthodox. As reported last month:

In a change to Church law, Latin-rite Catholic deacons may not preside at a wedding when one or both of the new spouses are members of an Eastern Catholic church.

The new rule is one of the changes to 11 canons in the Latin-rite Code of Canon law that Pope Francis approved in order to harmonize the laws of the Latin and Eastern Catholic churches on several issues involving the sacraments of baptism and marriage.

After more than 15 years of study and worldwide consultation, the conflicting rules were resolved by adopting the Eastern code’s formulations for the Latin church as well, said Bishop Juan Ignacio Arrieta, secretary of the Pontifical Council for Legislative Texts.

The bishop spoke to journalists after the publication of an apostolic letter published “motu proprio” (on his own initiative) in which Pope Francis ordered the changes to the Latin Code of Canon Law, the 1983 text governing the majority of the world’s Catholics.

In both the Eastern Catholic and Orthodox traditions, the blessing of a priest is necessary for the validity of a marriage. In the Latin-rite church, a deacon can preside over the sacrament. The new law specifies, “Only a priest can validly assist at the matrimony of two Eastern parties or between a Latin and Eastern Catholic or non-Catholic,” meaning a member of an Orthodox Church.