Dear pastors, here are 5 things to do before you say Mass ad orientem 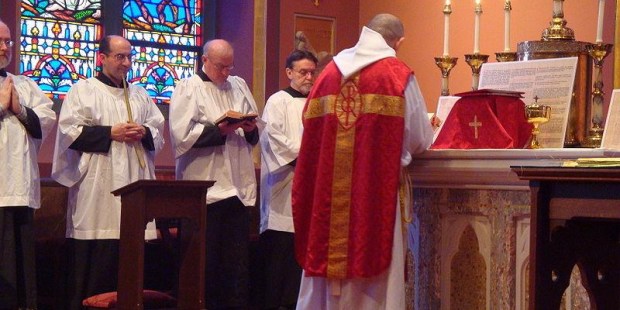 I don’t have strong feelings about this one way or another. But I do have some feelings about how this proposed change, if and when it happens, should be handled in the parishes. Cardinal Sarah seems to believe this can happen quickly and without any fuss; he’s suggesting priests start saying Mass this way in Advent, just four months from now.

Whoa. Stop the presses.  That may be possible, but it shouldn’t be done in haste or without some thought and prayer.

I have five suggestions for pastors and liturgists before we get that far. If you’re going to institute a major change like that, be prepared. This demands planning, and catechesis. So first things first…

1.Do not say to the people, “Beginning next Sunday, we’ll be saying Mass with our backs to the congregation.” Rightly or wrongly, people think this is what it’s all about. This is the single biggest objection people will make. “Father is turning his back on us!” Please. There are layers of theology and history behind this orientation. There are beautiful, even poetic ways of evoking what this way of praying actually represents—solidarity, humility, a sense of shared and unified worship in one direction.Make the case. Bring the people with you on this journey. Help them to realize this is not a relic from the past, a throwback to a bygone pre-Vatican II age, but a way of praying that is immediate and relevant and real.

2.Do not say, “We’re all going to be facing God.”  That’s just simplistic and lame. Every third grader knows: God is everywhere.  And this implies that we haven’t been doing that for the last 50 years, and that the Novus Ordo most people know is somehow deficient.  (Spoiler alert: Jesus is just as present in the Ordinary Form of the Mass as he is in the Extraordinary Form.)  Fr. Dwight Longenecker put it well a few weeks ago: “At the heart of the Christian experience is repentance and conversion of life. The word metanoia or repentance actually means ‘turning in a new direction.’ Therefore, at Mass when we orient ourselves toward the tabernacle, toward the Lord’s presence, we are turning in a new direction—turning away from ourselves and toward him.”

3.Make clear that this is a venerable and cherished part of our tradition.  And make clear that the central theology of the Eucharist will not be changing—only our physical approach to this great mystery.  Put another way:  “The priest offers Mass facing the same direction as the people, because he and the people together are offering worship and sacrifice to God. He is not turning his back on the people to exclude them. Rather, as a Christian community, are all facing ad orientem (i.e. toward the east) waiting in joyful expectation for the coming of our Lord Jesus Christ who will return to judge the living and the dead and the world by fire(Rite of Baptism, 1962). What in the early Church determined the position of the altar was that it faced Eastward. To quote St. Augustine: “When we rise to pray, we turn East, where heaven begins. And we do this not because God is there, as if He had moved away from the other directions on earth…, but rather to help us remember to turn our mind towards a higher order, that is, to God.”

4.Don’t be afraid of asking for feedback and answering questions.  If you decide to do this in your parish, there’s nothing wrong with having discussions with the people who will be impacted by it. If you’re comfortable doing it, have a Q&A session to address concerns. Publish an article or two in your bulletin explaining it. Take time to meet with people. In a lot of ways, this is a bigger deal than the revised translation of the Missal that was introduced a few years ago. It will fundamentally affect how people experience the celebration of Mass.

5. Expect blowback. Be patient.  Most people in the pews have never experienced Mass any other way. They’re used to Father facing the people, all the time. This will be a shock to the system. (See #1 above). It will also be a shock to some priests, who will need to reorient something more than just their bodies. They’ll need to rethink how they pray the Mass, and some may be momentarily startled to look up from the altar and see a wall instead of the faces of their flock.  (This could actually be a good thing, don’t you think?)

It remains to be seen how far Cardinal Sarah’s suggestions will actually go—and if the Vatican will make this a required change, to be implemented worldwide.  It could be a radical shift.

But, handled properly, it doesn’t have to be an alienating one.

UPDATE: Deacon Bill Ditewig added this comment on Facebook, which adds some excellent context, so I’m including it below:

First, do NOT present this suggestion in a triumphalistic manner which suggests one side or another has “won” the liturgy wars. There should be a recognition of the reasons why many (most?) Latin Rite dioceses/parishes moved to versus populum in the first place! To listen to some arguments today, one would think that the reason we “face the people” today was the result of some hippy-dippy priests and theologians from the 1960’s who were trying to make the Mass cool and hip. That was most assuredly NOT the case, and just as you will need to make the case that “ad orientem” is a venerable part of the tradition, so too is versus populum. It’s not so much a question of a “right way” or a “wrong way”: there can be value in BOTH ways. Second, the key here is the pastoral care of our people AND the carrying out of the mission of the Church: evangelization. Let me explain. Back when the current translation of the Ordo Missae was about to be implemented, I was frequently asked at talks and in class about whether I thought it a good idea or not. I think the same standard applies in assessing this suggestion, to wit: The Second Vatican Council (in Sacrosanctum Concilium, the Constitution on the Divine Liturgy) repeatedly directed that “the full, conscious and active participation of the faithful” was to be the norm for reform “above all other considerations.” Therefore, IF the current translation, and to this point, IF the move to “ad orientem” leads to the FULL, CONSCIOUS and ACTIVE participation of all hands, then it can be a good thing. (And before anyone jumps in here and says that “active participation” doesn’t mean jumping up and down like kids at a dance, I get that, and I’m not suggesting that here!)