Despite threat from ISIS, 100 children receive First Communion in Iraq 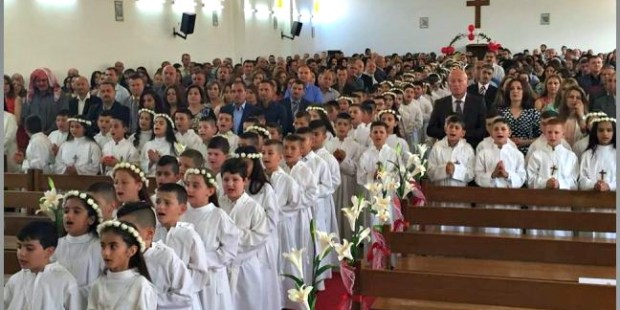 The first communion Mass in Alqosh was an historic moment for a “frontier town” that has been under threat from the militants of the Islamic State (IS) for a long time. Now it can “hope for peace and normalcy” around these hundred children, said Mgr Basil Yaldo, auxiliary bishop of Baghdad and close associate of the Patriarch Louis Raphael Sako.

The Chaldean primate presided over the ceremony that was attended by “all the priests of the city, the nuns and more than 700 people. The faithful were excited because for the first time, the patriarch celebrated communions in the community.”

Like many other towns in Iraqi Kurdistan, Alqosh too welcomed scores of refugees.

“Life in the area is almost back to normal,” said the vicar of Baghdad. “We hope that soon the whole plain [of Nineveh] can be liberated from the jihadists, and that refugees can return to their villages.”

The work to secure the area, he added, has “already started and for the past two days Iraqi troops have launched the battle to liberate the villages surrounding Mosul.”

…Addressing the boys and girls who received the first communion, Patriarch Sako urged them not to abandon their land, the city of Alqosh, but to stay and help in the reconstruction “because there is a (Christian) heritage to be preserved. ”

After the service, the children asked Patriarch Sako some questions. One of them, Mgr Yaldo noted, said that when he “grows up he wants to become a priest to serve the poor and the needy.”

The patriarch could not hold back his emotion after listening to such words, adding that “it is important to support and share the suffering.”

Read it all. God bless every one of them and keep them safe.