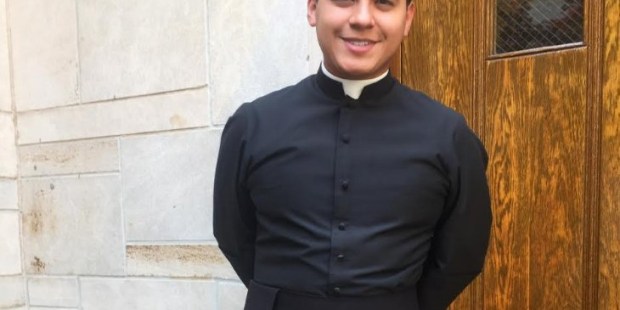 Share
Print
Deacon Greg Kandra | Sep 05, 2017
With more attention now turning to President Trump’s decision on DACA, this seems a good moment to revisit a story that first circulated last fall, from the organization America’s Voice. It reported that Sen. Dick Durbin had been taking to the Senate floor to tell the stories of people who had benefited from DACA. At one point, he spoke of a Catholic priest:

Sen. Dick Durbin profiled Father Rey Pineda, a DACA recipient and Catholic priest at the Cathedral of Christ our King in Atlanta, GA, who has been in the United States since the age of two and whose future as a priest depends on DACA.

Hearing Father Pineda’s story begs the question: in what possible way would America benefit from Father Pineda no longer being able to serve his parish and his community? How is America bettered by ending DACA and restricting the futures and opportunities of Father Pineda and hundreds of thousands of other DACA recipients?

“In 1990, when Rey was two years old, his family came to the United States from Mexico. Ray grew up in Atlanta, Georgia, he worked hard and was an honor roll student in high school, and became the first member of his family to attend college. In 2010 he graduated with a major in philosophy from Southern Campus in Georgia. He is a devout Catholic. He decided to attend seminary in my home state of Illinois. He felt that God was calling him to be a priest, but his spiritual path was blocked. He is undocumented. He is a Dreamer. Then, in 2012, everything changed. President Obama signed the executive order establishing DACA. In March of 2013, Rey was approved. He went to the background check, did everything he was asked to do. He received his DACA status and he knew that at least for two years he would not be subject to deportation. That allowed him to become a deacon in the Catholic church two months later in May 2013. In 2014, he entered the priesthood after he graduated magna cum laude from the seminary in Illinois. He has a Masters in divinity. Today he is a priest.”

Senator Durbin then quoted Father Pineda’s own words about the importance of DACA:

“‘Like many Dreamers, the United States is only — really the only country I know. DACA was an answer to prayer. Without DACA, I would not have been able to serve as a priest in my community. I believe my faith in god has brought me to this point in my life, but my faith in America’s promise has pushed me to keep fighting for peace, justice and opportunity in this great country I proudly call home.’”

Senator Durbin, and Father Pineda, then explained what’s at stake – both for the Dreamers and for America:

“If DACA is eliminated, and that threat has been made, Father Rey Pineda will lose his legal status and be subject to deportation, being sent back to a country that he hasn’t lived in since he was 2 years old. That would be a tragedy for Father Rey and his congregation and the hundreds of people who count on him as their priest. … Listen to what Father Rey told me about his role as a priest and also as an undocumented immigrant:

‘I believe my entire journey has prepared me to be compassionate with the sufferings of the many people I encounter. I look at my ministry as a calling, to build bridges between people from all walks of life. Diversity sometimes brings challenges between people. I want to help to heal those differences.’