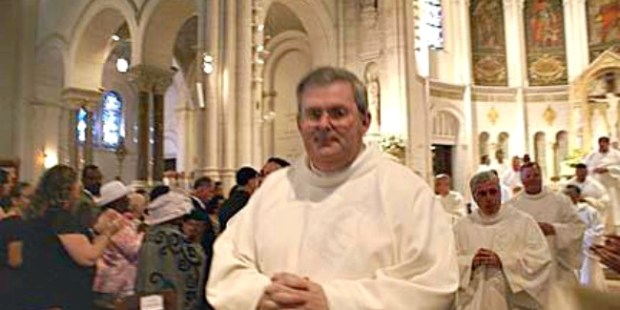 He was taken from us much too soon, just nine months after ordination, at the age of 50 after a brief battle with colon cancer.

I’ll never forget Jim’s funeral on March 1, 2008. Bishop Frank Caggiano was the celebrant. Bagpipes played. It was a brilliant, brisk late winter morning. The church was packed with cops and clergy.  I preached the homily—the first funeral homily I delivered as a deacon— and I recalled how much Jim loved all things Disney and that his favorite Disney character was the character of conscience, Jiminy Cricket:

Jiminy Cricket sang about dreams — about wishing upon a star and trusting in things we can’t see.

As the song put it: “Like a bolt out of the blue, fate steps in and sees you through.”

Fate. You could also call it luck, or destiny, or chance. It’s been said that “Chance is the pseudonym God uses when he wants to remain anonymous.”

Maybe the song is really telling us: “Like a bolt out of the blue, God steps in and sees you through.”

That, in a nutshell, was Jim’s theology. His life was a testament to it. And he left us a reminder of how God works in our lives – and how we are to live our lives.

Many of Jim’s classmates today are wearing the stole that we received at our ordination. It carries the image of a fishing boat, headed out to sea. The person who designed it was Jim. Nothing made him prouder than to see everyone wearing that stole on ordination day. That image represents what Jesus told his disciples in Luke’s gospel: put out into the deep. Sail into uncharted seas — guided by faith, trusting in God’s infinite mercy.

That was Jim’s journey. Now, he has finally arrived at that distant shore.

This morning, the image on the stole rests where it belongs, over my heart. And as I look out at my brother deacons — also wearing that image over their hearts — I see Jim’s legacy. This stole is a kind of beautiful and hope-filled homily – the greatest one Jim ever gave. And it’s one that will be retold again and again and again.

It tells us: the sea won’t always be smooth. The destination may not be clear.

But open your sails to the wind. Look above. Trust in the stars. Dare to dream. And: put out into the deep.

Because God steps in and see you through.

“Where I am going, you know the way.”

So: do not let your hearts be troubled!