Group Claiming to be Former Muslims Disrupts Masses Around Nevada 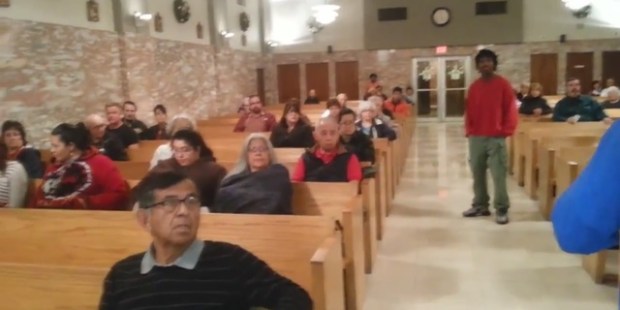 Parishioners are terrified after protesters have disturbed Mass at several Catholic churches across the valley.

The group, Koosha Las Vegas, includes members who clearly identify themselves as former Muslims turned Christians. They’ve been entering churches during services, shouting at Catholics that they need to repent now or else, and filming the acts and posting them on the internet.

The videos make clear the group has been active on the Las Vegas Strip and several other places around the valley; they’re often seen with large signs and megaphones. The difference now is that they’re going into houses of worship and causing disturbances. Parishioners tell Action News it’s made them fear for their lives.

The videos are taken by the very people passing out the pamphlets and shouting during mass in at least 3 incidents confirmed by police. The Catholic Diocese of Las Vegas confirmed to Action News “multiple disturbances at several of their properties”.

Read the rest.
Worth noting: nobody is saying these characters have any connection to ISIS. They profess to be fundamentalist Christians who are trying to save Catholics from Catholicism.

You can watch a video of the group in action below: