For audio of this homily as it was delivered, click the green arrow below.

Three years ago, on the 3rd of July 2009, 33-year-old Scott Fedor was vacationing with his wife at Coldwater Lake in Michigan.   It was a place they’d visited often, and loved.  But the weather had been dry and the lake had receded, had become more shallow. So Scott wasn’t prepared for what happened when he dove off the dock.  He struck the lake floor.  The impact instantly broke his neck.  He was left paralyzed from the shoulders down.

Scott has spent every day since trying to get back some of his regular life.   He’s confined to a wheelchair.  But he is determined that one day he will walk again, and he tries to make his life as normal as possible.  Which is why, early last week, some of his friends helped him fulfill a dream.  They took him to a Bruce Springsteen concert in Cleveland.

Scott Fedor is crazy for Springsteen, knows all his music.  Before he left, he sent an email to Springsteen’s PR manager, telling his story and describing how much he loved one of Springsteen’s songs in particular, “Trapped,” which contains the line: “I know some day I’ll walk out of here again.” Scott wasn’t sure if anything would come of it.

Tuesday night, Scott went to the concert.  After it was over, someone from Springsteen’s staff came out to find him.  He took him to a service elevator and then backstage.  And there, to his amazement, Bruce Springsteen, the Boss, came out to meet him.  Scott wrote about on his blog this way:

“He walked right up to me and placed his hand around my neck and kissed the side of my head. ‘God bless,’ were the first words one of the greatest rockers of all time said to me. And at that very moment there was not a doubt in my mind of how blessed by God I really was. I was alive.”

Springsteen posed for pictures and chatted for a few minutes.  Then he noticed the holy medal Scott was wearing around his neck – a medal of the Blessed Mother.  Bruce Springsteen was wearing the exact same medal.  He smiled.  “Ah, a Catholic boy,” he said.  And Scott replied, “We’ve got to stick together.”  And then Springsteen leaned in and gave him another kiss on his head and said again, “God bless you.”  And then he was gone.

A priest friend was with Scott that night.  He wrote later that he believed the two men – two “Catholic boys sticking together” – managed to see, in each other, Christ.   It was a moment of unexpected grace.

You never know where or how you will find those moments. We hear about one of them in this Sunday’s gospel – a very real encounter with Christ that left the disciples, in the words of Luke, “incredulous.”

The disciples met the risen Lord themselves in a tangible, physical way — a figure of flesh and bone, of wounds and scars, who even ate with them. “Touch me and see,” he told them.  See, he said, and believe.

This is the last of the resurrection appearances that we’ll be hearing about in the Sunday gospels this Easter season. But whether we realize it or not ,all of them, collectively, point to what we are doing today.

First, there is a communal aspect: after rising from the dead, Jesus appeared togroups of people, always two or more.  Secondly, there was often some form of a meal involved, whether it was the breaking of the bread at Emmaus, eating fish here, or preparing breakfast on the seashore. Thirdly, after these encounters, the disciples gained a deeper understanding of his message, his mission, and the scriptures. Finally, he often came bearing a message: Peace.  In the end, those he met were somehow changed.

If it sounds familiar, it should.  These encounters with Christ foreshadowed what we are doing here and now, in our own celebration – one that is communal, that is a meal, that breaks open God’s word and that leaves us, somehow, changed.

Make no mistake: what happened 2,000 years ago is happening again here. Christ is with us.

The disciples had his presence made real, in flesh and blood.

We have his Real Presence, under the appearance of bread and wine.

When you think about what is happening— what is unfolding here before us and among us—we should be, like the disciples, full of joy.  We should be “incredulous.”  And we should be profoundly humbled.  Christ invites us at every Eucharist to encounter him. To share a meal with him.  To touch him.   To receive him.  To make him a part of us, and to then take him out into the wider world.

Which means that the Resurrection that we celebrate this Easter season wasn’t just a moment in history, something in the past tense.

It is in the present tense.

And, if we choose, it can continue to leave us transformed.

At the concert Tuesday night, Springsteen dedicated one of his songs to Scott Fedor, a folk anthem called “We Are Alive.”  The song begins with the image of a cross – “a cross up on Calvary Hill,” the lyric says – and describes a graveyard, where the souls of the dead live on.   In many ways, it is a song of triumph over death, of resurrection and hope. The refrain says:

My friends, because of “the cross up on Calvary Hill,” because of Easter morning, weare alive, alive in Christ.

And when we receive the Eucharist, he is alive in us.

Let us never forget that.  And pray to continue what began with the bright flame of the Easter vigil, the flame that still burns here in this candle and within each of us.

Carry the fire.  Light the spark.  Stand shoulder to shoulder and heart to heart.

Because we are alive. 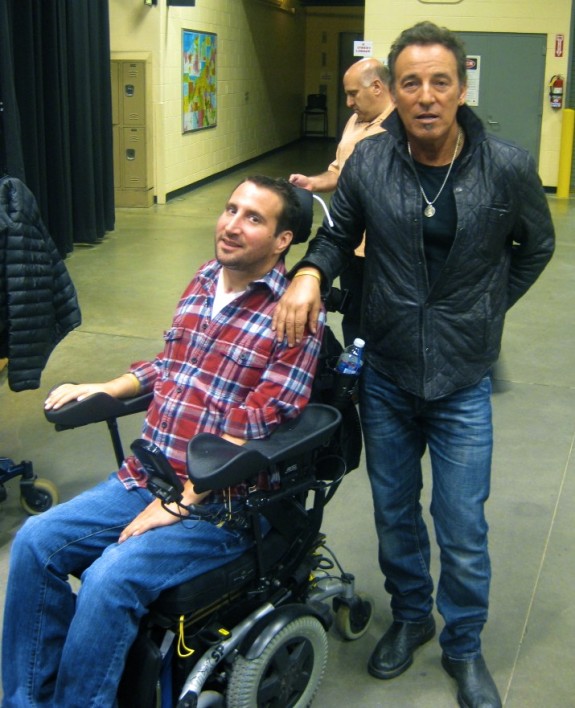 Prayer for this evening
Top 10
1
J-P Mauro
Hear Clapton and Pavarotti sing a prayer to the “Holy Mothe...
2
Meg Hunter-Kilmer
Saints to help if Mother’s Day is hard
3
Zoe Romanowsky
Moving 1-minute film about motherhood will touch your heart
4
I.Media for Aleteia
These 30 shrines will lead the Rosary Relay for end of the pandem...
5
Philip Kosloski
3 Signs of a spiritual attack on your soul
6
J-P Mauro
Philippines finishes construction of largest Marian statue in the...
7
Bret Thoman, OFS
A pilgrimage in the footsteps of St. Catherine of Siena
See More