Homily for Holy Thursday: Mass of the Lord’s Supper 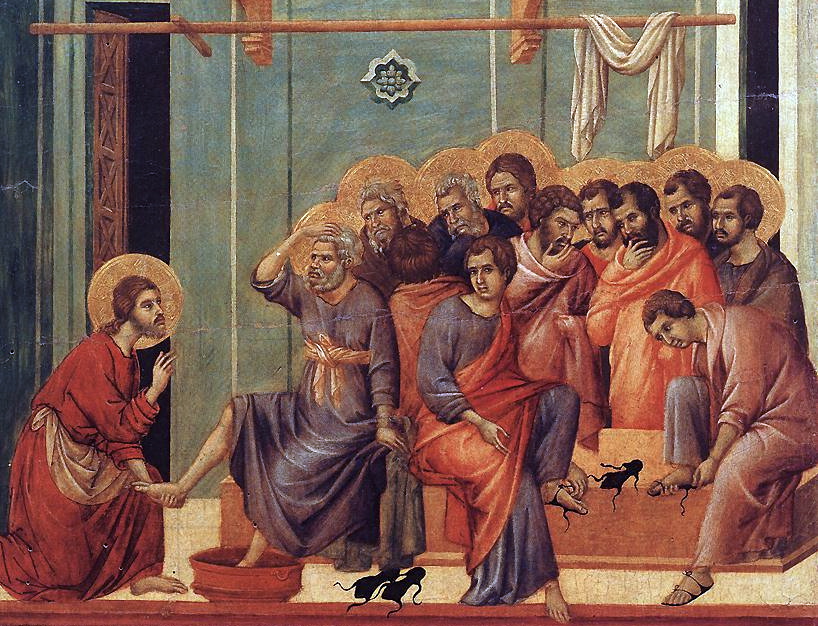 From the vault: my homily from Holy Thursday 2010:

Not long ago, The History Channel showed a documentary in which scientists attempted to create what may be the most realistic 3-D image of the face of Christ.

They spent many months on the project, using sophisticated computer technology to craft the image from the Shroud of Turin.

The result is the face of a young man with long hair, and a beard, and scars, and blood stains around his brow. The computer estimates that he’d be about 5’8″. He looks heavier, more muscular than most may think. But he otherwise looks very much the way any of us might imagine Jesus looked at the time of his death.

What Jesus really looked like has fascinated us for centuries – and it’s informed how he’s been portrayed in art. And it’s not just what he looked like, but what he did. We see him depicted so often in art as a crucified victim, or a good shepherd, or a teacher preaching to his followers.

But tonight, on one of the holiest nights of the year, we are given a very different picture of Jesus. And it may be more surprising than anything you’d see on the History Channel.

We see him on his knees, wiping away dirt, washing feet.

This is truly what it means to be Christ. He said so himself.

“I have given you a model to follow,” he tells his apostles. “So that as I have done for you, you should also do.”

For all those who ask the perennial question, “What would Jesus do?,” here is your answer.

But the message, I think, is the same. Tonight, God gets down on his knees for us. Tonight, He lowers himself. Tonight, He becomes a servant to the world — as humble as a slave, as meager and plain as a crumb of bread.

From this, we learn what it means to be like Christ.

The overwhelming impression is surprising, and challenging. It is God becoming less…so that we can become more.

One of his last acts on earth, the last communal moment with his friends, is spent taking care of them, purifying them, removing the dust of the day. Perhaps he is anticipating the roads they will travel in the hours ahead. Maybe he is somehow getting them ready for the long journey ahead — missions they will undertake after he has gone, traveling by foot to bring the gospel to the world.

I also think it is also a beautiful representation of the priesthood, and the sacrament of reconciliation. We all walk the earth carrying the debris of our lives – our failings, our sins, our weaknesses. They cling to us. But here, they are washed away. We are made new; we can begin again.

And this, too, is what it means to be like Christ.

“As I have done for you, you should also do.”

The Imitation of Christ begins with this moment. It is in the selfless service, doing what others won’t do, or can’t.

It is people like Fr. Rick Frechette, in Haiti, performing surgery on the poorest people of the Western hemisphere’s poorest country, and caring for those who cannot care for themselves, and quietly going to mass graves to pray for the dead when no one else will.

It’s aid workers in Sri Lanka and Sisters of Charity in the Bronx and missionaries in Nepal.

And it is priests like those here tonight, and thousands around the world, who anoint our sick and offer absolution for our sins, and celebrate mass with one simple goal in mind – to save souls.

At a moment when the priesthood is under attack, we can’t forget those who are quietly, prayerfully, persistently doing God’s work in our world – the great majority of good priests whose work often goes unnoticed. You won’t see headlines about them in the New York Times.

Years ago, when the AIDS crisis first broke, protestors showed up regularly at St. Patrick’s Cathedral to throw condoms and protest the church’s teachings about sex. But every week, Cardinal O’Connor left his residence and went to St. Claire’s Hospital in midtown to visit AIDS patients — to bathe them and empty their bedpans. No one ever knew about it. It wasn’t reported until after he died. But that kind of work goes on today, in every corner of the world. I think of Bishop Daily, who rises early almost every Saturday, in every kind of weather, and puts on his coat and goes to the abortion clinic down on Austin Street, and stands outside, and simply prays the rosary. A humble, simple act that can change hearts and, maybe, save lives.

That is what it means to be like Christ.

That is what it means to wash feet.

“As I have done for you, you should also do.”

That is Christ’s message to his followers 2,000 years ago – and, of course, to us tonight.

And so, this night, confronted with this challenging gospel reading, it’s worth asking ourselves: what have we done? How many feet have we washed?

How have I tried to imitate Christ?

Science and technology can only tell us so much.  The fact remains: if you want to really know what Jesus looked like, you won’t find it on the History Channel. You won’t even find it on the Shroud of Turin.

Look, instead, to tonight’s gospel.

Because here – on his knees before others, his head lowered in humility and in love, doing the work of a slave – here is where you see the true image of Christ.

Prayer for this evening
Top 10
1
Larry Peterson
This is the only officially recognized Marian apparition in the U...
2
Philip Kosloski
A scientist describes the Miracle of the Sun at Fatima
3
Cerith Gardiner
Nightbirde finds inspiration in Joan of Arc
4
Agnès Pinard Legry
Three brothers ordained priests on the same day in the Philippine...
5
Cerith Gardiner
Archbishop gives little girl a beautiful response about why God a...
6
Philip Kosloski
Vatican II’s primary goal, according to St. John XXIII
7
Dolors Massot
Two sisters become nuns at the same time in Spain
See More