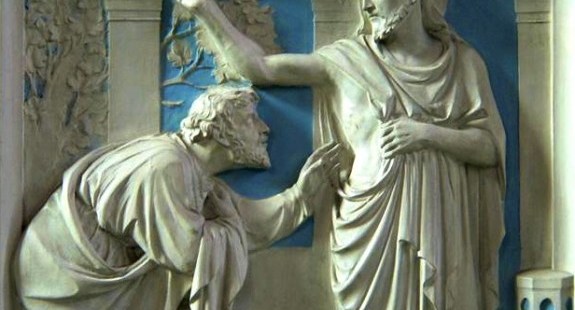 copyright the deacon's bench blog
Share
Print
Deacon Greg Kandra - published on 04/23/17
This Sunday, the man I’m mentoring in the diaconate program made his profession of faith at our 11:30 a.m. Mass. I preached this homily at that liturgy. He will be ordained next month. Pray for him and all those discerning a vocation!

Two weeks ago, the world was horrified by the attacks that left dozens dead in Coptic churches in Egypt.

But this past week, the world saw beyond that tragedy—and saw, unexpectedly, a beautiful witness to the faith.

It happened on Egyptian television. A reporter sat down to interview the widow of Naseem Faheem. Naseem was a guard at St. Mark’s Cathedral in Alexandria. On Palm Sunday morning, he encountered a man behaving suspiciously. He stopped him outside the church to question him. Seconds later, that man detonated a suicide bomb, blowing himself up and killing Naseem. Naseem, in doing his job, saved dozens of lives. He was hailed as a hero—and a martyr.

So it was that on national television, just days after his death, his widow agreed to an interview. She was asked her thoughts about what had happened to her husband.

Surrounded by her children, she answered in a way no one expected.

“I’m not angry at the one who did this,” she began.

Then she addressed her husband’s killer: “Believe me, we forgive you.”

“You put my husband in a place I couldn’t have dreamed of. May God forgive you,” and then she added, “and we also forgive you.”

After that, the camera cut to the anchorman, Amr Adeeb, one of the most popular television personalities in Egypt—and, a Muslim.

He was speechless. Deeply moved, he struggled to find the words.

“The Christians of Egypt,” he said, “are made of steel. How great is this forgiveness! This is their faith!”

This is their faith. This is our faith.

This is faith in Christ Jesus—a faith in the power and meaning and purpose of the Resurrection.

And: It is faith that has its roots in that Upper Room of the Gospel we just heard—a faith so overwhelming, a doubting disciple came to believe and could not contain his belief and could only say: “My Lord and my God.”

It is tempting to think that we live in a faithless age, a time of doubt or indifference, when fewer people believe.

But then you hear about the heroic men, women and children of Egypt—those who say with their words and their lives and their sacrifice, “I believe.”

And then you come to this church on Easter morning and encounter thousands of believers, so many that they are standing in the vestibule and spilling out into the sidwalk, all here because they need to say, on the holiest and most joyful day of our calendar, “I believe.”

It’s stunning to realize: When Thomas first saw the risen Christ, the church consisted of maybe, at most 20 people—probably less. They could all fit into that Upper Room.

From that the Christian faith has embraced billions.

Billions who say, “I believe.”

Today, despite difficulties and struggles and persecution and discrimination, countless Christians stand ready to profess their faith.

And we are about to witness one person doing that in a very meaningful way, here and now. By happy coincidence, the person doing doing it just happens to be named Thomas.

Five years ago, my friend Thomas Jorge made a momentous decision. He answered God’s call and began formation to become a deacon. Next month, by the grace of God, he will be ordained. He will receive the sacrament of Holy Orders and—I hope!—be assigned to serve here with me, giving the parish another deacon.

When he began his formation, Tom asked me to be his mentor. It has been my great privilege to walk with him and his wife Olga as they have made this journey together—a journey of faith and hope and love.

And this morning, Tom takes one more step in that journey before his ordination. He will do what I did in this church 10 years ago. He will place his hand on the Book of the Gospels and publicly make a solemn profession of faith and an oath of fidelity to the teachings of the Catholic Church.

He will declare publicly his faith in the resurrected Christ.

Tom will declare, for the record, “I believe.”

Some of the Profession of Faith will be familiar—it is much like the Creed we will pray together in a few moments.

But I think it has added resonance this day. It echoes what that other Thomas said 20 centuries ago—in fact, those words in the Upper Room could be considered FIRST profession of faith made after the resurrection.

Hundreds of years before the Council of Nicea gave us the Creed, these five words said it all:

This morning, let us pray that all of us may carry those words in our hearts as we come forward to receive the Eucharist—and, like Thomas in the Upper Room, behold the Body of Christ.

But may we also carry in our hearts a burning faith that doesn’t need to see to believe.

Faith…like that of our brothers and sisters in Egypt.

May it be said of us what was said of them: these Christians are made of steel.

Despite incredible challenges and suffering, they forgive.

In forgiving and loving and hoping, they have made of their lives a profession of faith.

May God help us to go and do likewise.