“Jesus Had Two Dads”: What’s Behind That Controversial Church Sign 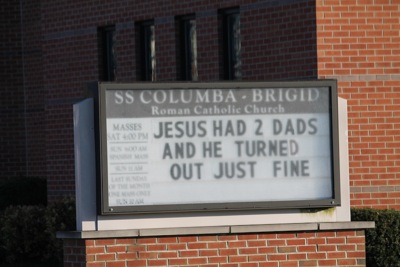 Share
Print
Deacon Greg Kandra | Nov 10, 2015
It made news in Buffalo this weekend, when those words were spotted on a sign outside a Catholic Church.

That led to this response from Buffalo’s Bishop Richard Malone:

“Thank you for your message regarding the sign at SS Columba – Brigid Church here in Buffalo. As soon as I learned of this sign, I took immediate action to have it removed. The pastor of SS Columba – Brigid Church told me that the “2 Dads” were meant to refer to a child who has both a father and stepfather. There are several children in his parish who have both a father and stepfather. However, given the potential for the meaning of this message to be misunderstood and even perceived in a heretical way, it was immediately removed.”

A little Googling, however, turned up other church signs around the country—and even in Canada—conveying that exact message.

In fact, it’s theme is international. Two years ago, it was spotted on an Anglican church sign in Gosford, Australia:

More recently, it even popped up earlier this year in the middle of the Supreme Court debate on same sex marriage:

It’s also being used as a pro-gay slogan in the UK, where a commentator on the BBC found himself in hot water for saying it:

Host Ciaran Varley, 28, made the comments on BBC Raw, an online platform launched by the broadcaster in February, in a bid to develop new talent and engage younger viewers in current affairs.

During one episode fronted by Varley, he accuses the Christian community of hypocrisy, due to their opposition to same-sex marriage.

“Jesus himself had two dads [and] turned out alright”, he says.

The same episode pokes fun at the Bible with an image of a dinosaur in white robes and a halo, above a tagline about God’s supposed views on sex.

As if that weren’t enough, you can also find the sentiment on Father’s Day cards:

At least one church says the message has provoked acts of vandalism.

“We put it up on the day of the argument about marriage equality with the Supreme Court,” said Kim Smith, pastor of the church, referring to the arguments conducted the last week of April with regard to same-sex marriage. Days later, on Sunday night, the sign was vandalized.

The pastor noted that the message wasn’t original; another Methodist church in a different part of the country came up with it, she said.

“As a reconciling church we are proud to accept members of all beliefs. Unfortunately, even in Marin and Mill Valley, bigotry can raise its ugly head,” said Chris Hubbard, a member of the church.

So where did it start?

I found a blog reference from 2010, and a longer examination of the theology behind it from 2011, indicating it had been around a while:

There is a phrase that has been doing the rounds in gay Christian circles for a while now: “Jesus had two dads, and he turned out just fine.” Is there any scriptural basis for this? Yes, of course there is. It is right there in Matthew chapter 1. Joseph’s role in Jesus life was so important that his lineage was traced through Joseph, not Mary. Joseph wasn’t merely some human caretaker, he was Jesus’ human father. At the same time, God was Jesus’ father in a much more literal sense than he is our father, so there is no doubt that, for mainstream Christians at least, Jesus did have two dads.

Christian pastors invariably defend the message, arguing it doesn’t mean what people think it does. Here’s a report from Nashville in 2013:

Most drivers who saw it thought it was a comment on gay and lesbian parents, but the pastor behind it says it’s a comment about how Jesus had two fathers: God and Joseph.

He says the reaction is a misunderstanding.

“Theologically, Jesus is the son of God, but also the son of Joseph,” said Pastor Bill Campbell. “It’s about children and people who grew up in homes, extended families, parents that are separated and having step dads.”

Right.  (For a better explanation of the theology involving St. Joseph check out this piece by Fr. Michael D. Griffin.)

In short, there’s a rather long history of that phrase being put to use primarily to defend same-sex marriage.

Given all this, I find it a little hard to believe that whoever chose to put that phrase on a sign outside a Catholic Church in Buffalo in 2015 didn’t realize what it was saying or how it would be interpreted.

A lot of people know exactly what it meant.