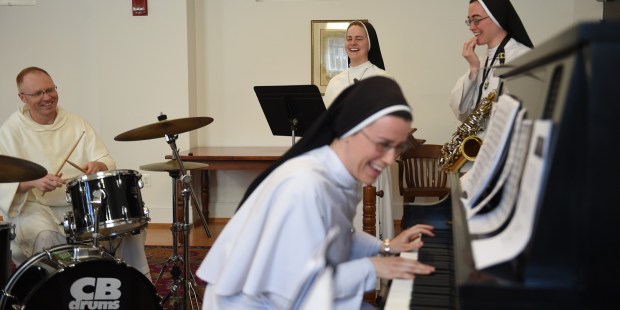 One Saturday afternoon this month a band gathered to jam at the Dominican House of Studies, not far from the Catholic University of America.

The drummer, a Dominican friar, counted them down.

Brother Brad Elliott, dressed in a habit behind his drum kit, was joined by Sister Miriam Holzman on the piano. Sister Peter Grace Weber was off to the side, with a bass guitar. Sister Louis Marie Zogg, on the saxophone, stood next to Sister Mary André Thelen, on the trumpet.

As the session continued, Brother Brad bopped his head, grinning. The sisters kept giggling as they worked out timing and tempo and little blips. There was joy in the room, and what they played.

Which was not church music. The band played “Unforgettable” and “What a Wonderful World,” because sweet jams are not just for the secular.

Sisters Miriam, Louis Marie, Peter Grace and Mary André are members of Force of Habit, a band led by nuns who live and study at Catholic University. The band is rounded out by Brother Brad and Father Jude DeAngelo, the university chaplain and director of campus ministry, on vocals. And, actually, they’re not bad.

The sisters, and those who know them, note that the band is part of a larger mission — to be a presence on the campus, connect with other students, and share and demonstrate their faith. It also serves as a reminder of what makes Catholic University, the Vatican’s university in the United States, unique.