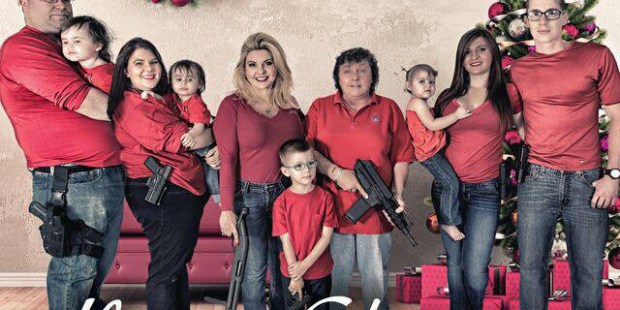 Share
Print
Deacon Greg Kandra - published on 12/05/15
Great moments in public service: Nevada Assemblywoman Michele Fiore is celebrating the birth of Jesus with the image here, the cover photo she has posted on her Facebook page.

UPDATE: A priest friend in South Carolina alerted me to this piece of news:

A state lawmaker who opposed removing the Confederate battle flag from Statehouse grounds earlier this year sent his colleagues a Christmas card featuring a picture of the rebel banner and advising them to ask forgiveness for their betrayal.

The card sent by Rep. Chris Corley, R-Graniteville, has a photo on the front of the Statehouse with the battle flag flying prominently in the foreground with Christmas wishes from the Corley family.

On the back, Corley excoriates those who voted to remove the banner from the Civil War soldiers memorial in the aftermath of the killing of nine black worshippers at Charleston’s Emanuel AME Church in June, allegedly by an avowed white supremacist who posted pictures of himself online posing with the Confederate battle flag.

“May your Christmas be filled with memories of a happier time when South Carolina’s leaders possessed morals, convictions and the principles to stand for what is right,” the card read. “May you have a blessed Christmas, and may you take this joyous time as an opportunity to ask for forgiveness of all your sins such as betrayal.”

The card also references Dante’s “Inferno,” consigning those guilty of treachery to hell.

“This is Cocytus, the ninth circle, the fourth and last great water of Hell, and here fixed in the ice, each according to his guilt, are punished sinners guilty of treachery against those who they are bound to by special ties,” the card reads.