Msgr. Marini: When it comes to liturgy, ‘we should never fight’ 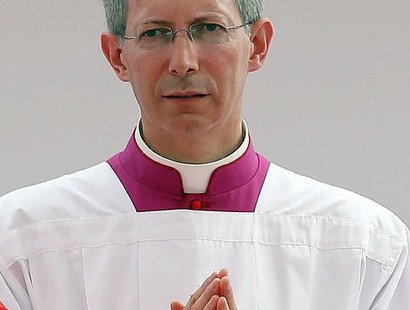 When a choir director and parish priest differ over liturgical music, the choir should follow in good faith the wishes of the priest for the sake of unity, said the papal liturgist.

When it comes to celebrating the liturgy, “we should never fight,” Msgr. Guido Marini told choir members, directors and priests. “Otherwise, we distort the very nature” of what the people of God should be doing during the Mass, which is seeking to be “one body before the Lord.”

The papal master of liturgical ceremonies spoke Oct. 21 at a conference opening a three-day jubilee for choirs. Hundreds of people involved in providing music for the liturgical celebrations in Italian dioceses and parishes — such as singers, organists and musicians — attended, as did directors of diocesan liturgy offices and schools of sacred music.

During a brief question-and-answer period after his talk on the role of the choir, a participant asked Msgr. Marini what she termed “an uncomfortable, practical question.”

“Many times, in our parishes, the priest wants the choir to perform songs that are inappropriate, both because of the text” and because of the moment the song is to be performed during the service, she said.

“In these situations, must the choir master follow the wishes of the priest even with the knowledge that by doing so, the choir is no longer serving the liturgy, but the priest?” she said to applause.

Asked for his advice, Msgr. Marini smiled, cast his eyes upward and rubbed his chin signaling his awareness that it was a hot-button topic. He said he felt “sandwiched” “between two fires, between priests and choirs.”

Acknowledging the difficulty of such a situation, he said he sided with the priest.