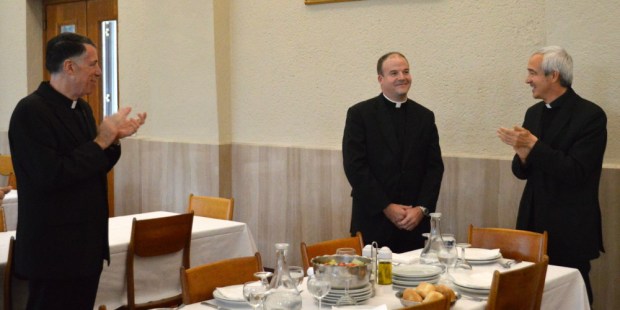 At this hour atop the Gianicolo, the 156 year-old seminary is slated to introduce Fr Peter Harman, 42 – a priest of Springfield in Illinois who’s served since 2013 as the NAC’s top pastoral formator – as its 23rd Rector. The choice formally made by the Congregation for the Clergy, which accepted the recommendation of the college’s 15-bishop Board of Governors, the appointment takes effect on February 1st. In the post, Harman succeeds Msgr Jim Checchio, who returns to his Mom and clan in South Jersey after a ten-year tenure that’s significantly solidified the the NAC’s resources while likewise growing its enrollment by some 60 percent.

The influence of the NAC cannot be overstated, as Rocco notes:

Whether they come as theologians preparing for ordination or advanced degrees afterward, its alums have formed the modern backbone of American hierarchical leadership: today, no less than two-thirds of the nine Stateside cardinal-electors – including three of the four who lead dioceses – are products of the college and/or the Casa, along with a heavy plurality of the nation’s bishops and a wider network that leaves practically no church entity on these shores untouched. Borrowing from another field, it’s a profession-wide impact comparable to having the graduate pools of Harvard Law and Yale Law rolled into one.

There’s much more at the link.

After ordination and finishing his License in Sacred Theology, Rev. Harman began his pastoral service in 2000 in Springfield at the Cathedral of the Immaculate Conception, where he would later serve as pastor for five years including during its 2008–2009 restoration. He had also taught at Ursuline Academy and served two years at St. Agnes Parish. Fr. Harman earned a Doctorate in Sacred Theology at the Catholic University of America, and later returned to Rome to serve in his current role on the North American College formation faculty, as well as serving as its director of Media Relations and as an adjunct instructor in theology at the Pontifical Gregorian University.

In light of Rev. Harman’s qualifications and new appointment, Msgr. Checchio has stated that having “a priest of Father Harman’s caliber with his pastoral and educational background will be a blessing for the seminarians and priests entrusted to his care”.