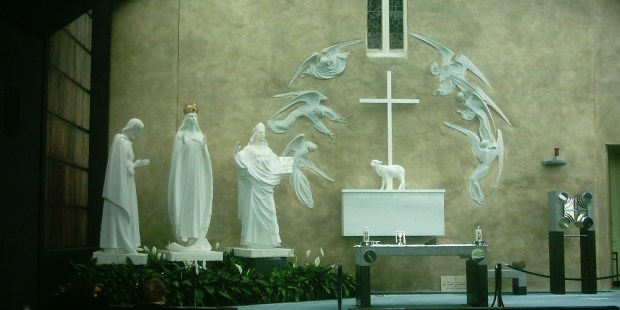 WWL
Share
Print
Deacon Greg Kandra - published on 05/13/17
While the world honors the anniversary of the first appearance of Mary at Fatima, the New York Times’ great Dan Barry takes note of a forgotten New Yorker who witnessed the apparition at Knock:

The letter delivered by hand to the Home for the Aged of the Little Sisters of the Poor commanded one of its residents — a John Curry — to appear before a tribunal of the Roman Catholic Archdiocese of New York. Refusal could lead to “ecclesiastical penalties,” a phrase conjuring eternal discomfort.

The retired laborer obeyed. Entering the archdiocesan offices in Midtown, he left behind the thoroughly modern New York of July 1937 — abuzz with the recent disappearance of the aviator Amelia Earhart — and returned to a remote County Mayo place called, simply, Knock. To one day in 1879, when he was 5, a day he said he remembered as well as last night.

“Are you the John Curry who is mentioned as having been an eyewitness to the alleged apparition of the Blessed Virgin at Knock Church on that date?” a priest asked. “And if so — ”

The witness interrupted to make at least one thing clear: “Yes, sir, I am the very John Curry.”

It is precisely because he was the very that John Curry is now of the moment. He was recently disinterred from a Long Island cemetery in order to be reinterred on Saturday in choice Manhattan clay: the small cemetery of the Basilica of St. Patrick’s Old Cathedral in Little Italy.

His prominent headstone is already planted, his lifelong distinction chiseled in the blue-black granite:

“Witness to the Apparition at Knock.”

What you choose to believe is up to you. This is merely the story of an Irish immigrant who died without means in Gotham obscurity, then rose to such postlife prominence that, amid considerable pageantry, the archbishop of New York, Cardinal Timothy M. Dolan, will celebrate his requiem Mass and pray over his new earthly home.

Read the story behind all this and note the moral of it all:

“There’s hope for all of us ordinary people.”