Ordination update: the Maine event, as eight are ordained in Portland

It’s late in the season for ordinations, but it’s never too late to welcome new men to Holy Orders.

From the Bangor Daily News:

Their mission is threefold — service to the Gospel, liturgy and charity. It sounds like a tall order for men who are working full-time jobs and have wives and families. 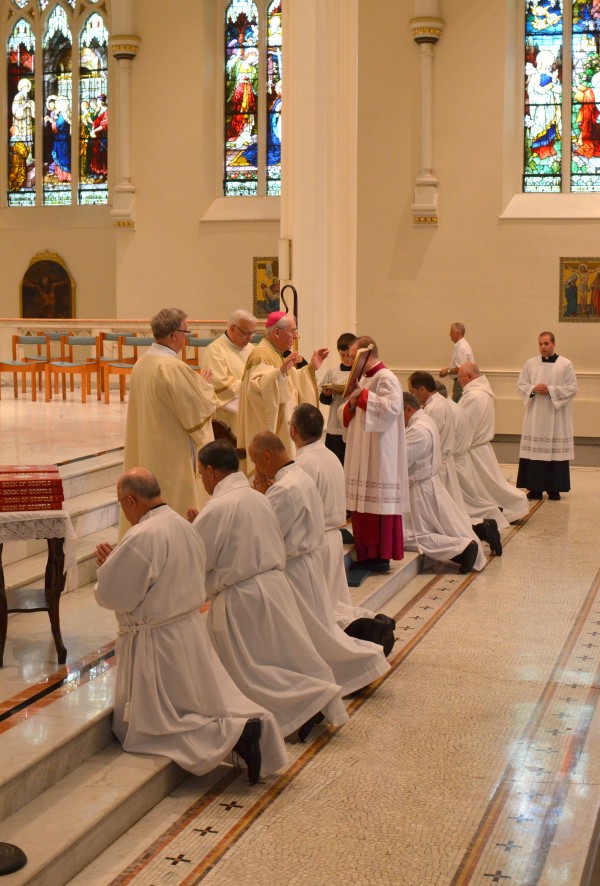 Yet on Saturday, eight men in the Roman Catholic Diocese of Portland took on the challenge of serving as deacons. They were ordained by BishopRichard Malone at the Cathedral of the Immaculate Conception in Portland, then headed home to begin work in their home parishes. Deacons Timothy Dougherty, 53, of Holden and Michael Whalen, 62, of Brewer assisted at Mass on Sunday morning at St. John Catholic Church. Dougherty is the treasurer of the Darling Corporation and Whalen is an accountant for Affiliated Healthcare Management. Both will fulfill their callings part time in St. Paul the Apostle Parish, which includes churches in Bangor, Brewer, Hampden and Winterport. “The first call to be a deacon came many years ago from Father Richard Harvey,” Dougherty said Sunday after Mass. “He was pastor at St. Joe’s [in Brewer] for about 25 years and a big influence on me. I didn’t really think serious about it then, but it kept coming back up until, finally, I answered the call.” So did Whalen. Both men were recommended for the permanent diaconate about five years ago by the Rev. Joel Cyr, now pastor of Christ the Divine Mercy Parish in Millinocket, when he served St. Joseph Catholic Church in Brewer. “It is a five year program of study,” Whalen said Friday in a phone interview. “We had a year of discernment, then were considered for admission. Then, we went through four years of formation that involved working on a master’s degree [from Loyola University in New Orleans]. We would meet one weekend a month at chancery in Portland for classes and spiritual development.” Their primary duties as deacons will be to visit the sick and shut-ins at their homes and parishioners in nursing homes, the Rev. Seamus Greisbach, a parochial vicar for the parish, said Friday in a phone interview. Dougherty will head the Commission for Family Life and Whalen will head the Commission for Parish Life.

Read the rest. And there’s even more at the diocesan website.Congratulations, brothers.  Ad multos annos!

UPDATE: From the “It’s A Small World” File: blogger Allison Salerno happened to be at one parish in Maine that welcomed two of the newly ordained deacons this morning.  Read all about it.