Pentecost continues in Brooklyn: 10 men ordained to the priesthood 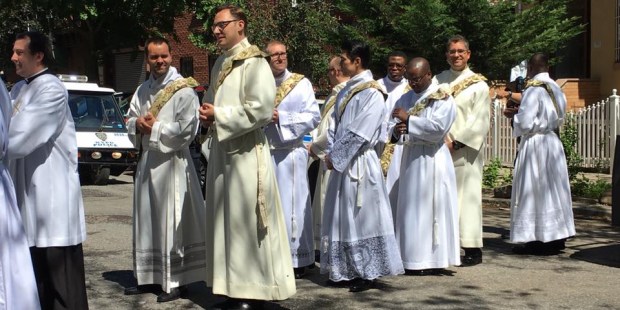 Share
Print
Deacon Greg Kandra - published on 06/04/17
The Holy Spirit has been busy!

Vocations are booming in Brooklyn, with 12 men ordained to the diaconate last weekend, and 10 to the priesthood this weekend.

The crop of new priests represents the third largest ordination class in the United States.

On Saturday, June 3, at 11 a.m., Bishop Nicholas DiMarzio will ordain 10 men to the priesthood for the Diocese of Brooklyn. Once again this year, the diocese ranks among the top in the country in the number of new priests. The ordination Mass will take place at the Co-Cathedral of St. Joseph, 856 Pacific Street in Brooklyn.

The new priests, who come from all over the world, will add to the rich cultural diversity of the diocese. Three were born in Brooklyn, two in Poland, two in Nigeria, one in South Korea, one in Cameroon, and one in Italy. The men range in age from 26 to 42. The group is the third largest to join a diocese or Archdiocese in the United States in 2017. The Diocese of Patterson will ordain the biggest class of 13 priests while the Archdiocese of St. Paul and Minneapolis will ordain 11.

The priests join the Diocese of Brooklyn with degrees ranging from Theology and Divinity to Latin, Philosophy, and Literature. They bring with them experience ranging from social work to mapmaking to rock music. In discerning God’s call to serve the Church, the men found inspiration in prayer, pilgrimage, family, and pastoral role models.

“There is no greater joy for a bishop than to ordain a man to the priesthood of Jesus Christ,” said Bishop DiMarzio. “This Saturday, we in Brooklyn and Queens will be fortunate to have ten more men who will perpetuate the great Sacrifice of Christ on Calvary. In a world that rejects sacrifice and embraces self indulgence, I am grateful for the courage of these men who offer their own lives for the sake of the proclamation of the Gospel.”

Pray for them. Read more about them here.