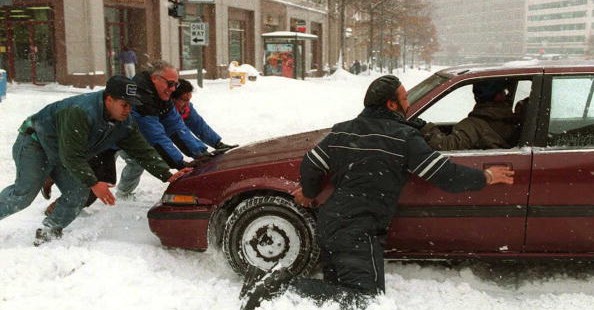 WASHINGTON, : Pedestrians push a stranded motorist out of the snow 08 January in downtown Washington, DC as snow continues to fall in one of the biggest snow storms to hit the area in recent history. Forecasters predict a snow fall in excess of 30 inches in the area. AFP PHOTO Bob PEARSON (Photo credit should read BOB PEARSON/AFP/Getty Images)
Share
Print
Deacon Greg Kandra | Jan 21, 2016
The authorities in Washington are not taking this impending storm lightly:

Metro officials say the entire rail and bus systems will be closed this weekend due to the major snowstorm expected in the region.

Officials said they believe it is the longest closing in the system’s more-than-40-year history.

Service will not resume until at least Monday morning, officials said Thursday afternoon.

General Manager Paul Wiedefeld said in a statement: “The actions we are taking today are all in the interest of our customers’ and employees’ safety, and will help us return to service once the storm passes and the snow is cleared.”

CNN, meantime, has this:

• Amtrak also announced a modified schedule in the Northeast because of the impending storm.

• Gov. Tom Wolf has declared a state of emergency in Pennsylvania, joining Tennessee, Maryland, Virginia and North Carolina. “We cannot control the weather, but we can all be prepared for whatever the weather brings us,” he told reporters Thursday.

The predictions now say storm totals in DC could reach 30 inches—which could shatter records and cause huge problems in terms of travel, health and safety.

How serious is this? There’s this flashback from a couple years ago:

Nearly 2 feet of snow fell in February 2010’s “Snowmageddon” storm, which cut power to hundreds of thousands in the region.

For the weekend storm to be of historic proportions, snow accumulations in Washington would have to top 28 inches. That would exceed the calamitous “Knickerbocker Storm” of 1922, which dumped 28 inches and killed nearly 100 people when the roof of a theater by that name collapsed under the weight of snow.

As of midday Thursday, the greater Washington metro area — from Fredericksburg, Virginia, northward, incorporating all of Maryland — was under a blizzard warning.

“Heavy snow and blowing snow will cause dangerous conditions and will be a threat to life and property,” the National Weather Service warned. “Travel is expected to be severely limited if not impossible during the height of the storm Friday night and Saturday.”

Bowser, Washington’s mayor, has declared a state of emergency, closed schools for Friday and given the OK to move any vehicle found on a snow emergency route.

As Zelda Caldwell reported this morning, the March for Life is still scheduled to go on. Late today, Washington officials didn’t seem inclined to force its cancellation:

The federal permit required for the march to take place could be withdrawn under a provision that prevents gatherings in D.C. during severe weather events.

But U.S. Park Police spokeswoman Sgt. Anna Rose said that as of Thursday afternoon, representatives of federal and local law enforcement agencies had agreed to tread lightly and allow the event to go on because the bulk of the snowfall is expected overnight Friday into Saturday.

“As of this moment, it’s on,” Rose said. “This is a First Amendment event, and if people want to come and demonstrate, we want them to be able to come say what they have to say.”

I am a veteran of many Washington storms—some of them, real whoppers. I remember being stranded overnight at CBS News’ Washington bureau in the early ’80s, when a massive storm forced the first partial shutdown of the subway system. And I remember—vividly—covering Ronald Reagan’s second inaugural in 1985, when the temperature plummeted below zero and forced further shutdowns of the public transportation system. That year, for the first time ever, weather forced the inaugural ceremony to be moved indoors.

This sort of fierce weather in Washington happens, but it’s rare. And the city, trust me, is not that well-prepared for it. Three or four inches of snow generally paralyze the place. A foot? Forget even trying to travel or get anywhere. Two feet? Begin executing hibernation plans.

This storm could be not only devastating, but deadly. Getting from one place to another could be almost impossible. A few dioceses, I know, have canceled plans to make the trip. They’re being very prudent and smart.

The same common sense that should tell us to stay home from Sunday Mass when the weather is dangerous should be at play here. If your heart is set on marching for life, please reconsider. Getting around Washington, or getting out of Washington, is going to be a nightmare.

Though it may not seem like it, staying home and staying safe could be the most pro-life thing you could do tomorrow.