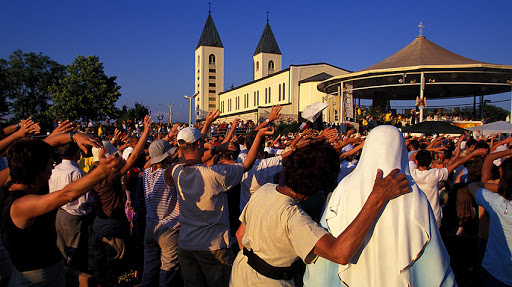 In response to a question from the press about the authenticity of the apparitions, Catholic News Service said, the pope, referring to the findings of a commission chaired by Cardinal Camillo Ruini, the retired papal vicar of Rome, explained:

“The report has its doubts, but personally, I am a little worse,” the pope told reporters traveling with him from Fatima, Portugal. “I prefer Our Lady as mother, our mother, and not Our Lady as head of the post office who sends a message at a stated time.”

“This isn’t Jesus’ mother,” he said. “And these alleged apparitions don’t have much value. I say this as a personal opinion, but it is clear. Who thinks that Our Lady says, ‘Come, because tomorrow at this time I will give a message to that seer?’ No!”

Despite his personal doubts, the pope said that the “spiritual and pastoral facts cannot be denied: People go there and convert, people who find God, who change their lives. There isn’t magic there,” he said.

He had more to say—including some thoughts about his upcoming meeting with Donald Trump. Read on.