Religious liberals rise up: “So I yell at the Holy Spirit, ‘Hurry up!'” 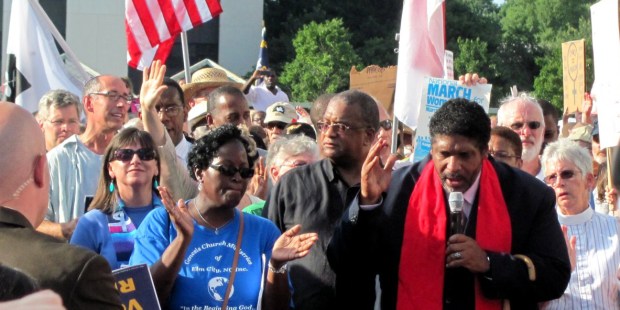 Share
Print
Deacon Greg Kandra - published on 06/10/17
I was wondering when someone would get around to writing about this, and here it is, from The New York Times:

Across the country, religious leaders whose politics fall to the left of center, and who used to shun the political arena, are getting involved — and even recruiting political candidates — to fight back against President Trump’s policies on immigration, health care, poverty and the environment.

Some are calling the holy ruckus a “religious resistance.” Others, mindful that periodic attempts at a resurgence on the religious left have all failed, point to an even loftier ambition than taking on the current White House: After 40 years in which the Christian right has dominated the influence of organized religion on American politics — souring some people on religion altogether, studies show — left-leaning faith leaders are hungry to break the right’s grip on setting the nation’s moral agenda.

Frustrated by Christian conservatives’ focus on reversing liberal successes in legalizing abortion and same-sex marriage, those on the religious left want to turn instead to what they see as truly fundamental biblical imperatives — caring for the poor, welcoming strangers and protecting the earth — and maybe even change some minds about what it means to be a believer.

“We’re in a real battle for the soul of faith, of Christianity, of this nation,” said the Rev. Troy Jackson, executive director of the Amos Project, a multifaith social-justice coalition in Cincinnati.

The last time the religious left made this much noise was in protesting the Vietnam War, when the members of the clergy were mostly white men. Now, those in the forefront include blacks and Latinos, women and gays, along with a new wave of activist Catholics inspired by Pope Francis. And they include large contingents of Jews, Muslims and also Sikhs, Hindus and Buddhists in some cities — a reflection of the country’s religious diversity.

Most surprising of all, perhaps, is that religious progressives are being joined at the ramparts by a noticeable number of energized young evangelicals.

Read on. Sister Simone Campbell makes an appearance, observing: “People are trying to figure out: How do we get traction? But it has not yet jelled. So I yell at the Holy Spirit, ‘Hurry up!’”