Remembering the Martyrs of El Salvador 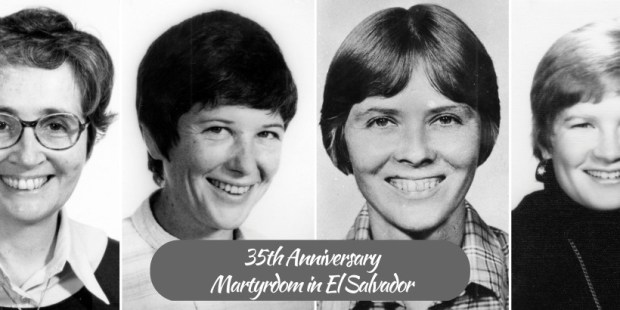 Share
Print
Deacon Greg Kandra - published on 12/02/15
Today marks the 35th anniversary of the martyrdom of four women who served as missionaries in El Salvador.  In 2009, I used their story as a springboard to talk about missionaries and sacrifice for my homily on World Mission Sunday. That homily is reposted below.

Anyone who lives and works around Brooklyn knows Bishop Ford High School, right off the Prospect Expressway.  And I imagine a lot of Catholics who live in the diocese know the story of Bishop Francis Xavier Ford: a Brooklyn priest who was the very first seminarian accepted into the Maryknoll order. He became a missionary, serving in China, where he was eventually arrested by the government. He died in prison in 1952. He is now a candidate for sainthood.

But fewer people, I suspect, know the story of his cousin, Ita Ford.

They should. Hers is a story that we cannot allow to be lost.

Ita Ford was born in Brooklyn in 1940. Her family lived on 57th Street, and she attended Visitation Academy in Bay Ridge. When she was a teenager she knew that, like her cousin, she wanted to be a missionary. Following in his footsteps, she also joined the Maryknoll order. She was sent to Latin America.

Sister Ita served for a time in Bolivia, and in Chile, where she lived in a shanty town and ministered to the poor. In the late 1970s, she was transferred to El Salvador. The country at the time was in the middle of a brutal civil war. Sister Ita worked primarily with an emergency refugee group – providing food, shelter, transportation…and faith. In a country torn by conflict and war, Sister Ita bore witness to the Prince of Peace.

Sister Ita served for a time in Bolivia, and in Chile, where she lived in a shanty town and ministered to the poor. In the late 1970s, she was transferred to El Salvador. The country at the time was in the middle of a brutal civil war. Sister Ita worked primarily with an emergency refugee group – providing food, shelter, transportation…and faith. In a country torn by conflict and war, Sister Ita bore witness to the Prince of Peace.

In December of 1980, after a trip to Nicaragua for a regional meeting, Sister Ita and another Maryknoll sister, Maura Clarke, flew back to El Salvador. They were met at the airport by another nun, Sister Dorothy Kazel, and a lay woman named Jean Donovan. While driving home from the airport, the four women were stopped by members of the Salvadoran National Guard. The men took the women to an isolated spot, where they were tortured, and raped, and killed. Their bodies were found in a shallow grave about 15 miles from the airport. A U.N. commission later found that the men were acting on orders from the Salvadoran military.

The five men who did it were put on trial and sent to prison. Three of them have since been released on good behavior.

Visit almost any Maryknoll convent today and chances are you will see a picture of those women on display.
They are modern martyrs.

But they were also , first and foremost, missionaries.

This is World Mission Sunday, and if you want to know what it means to be a missionary today, consider the story of Sister Ita Ford.

Consider what it means to travel from 57th Street in Brooklyn to a back street in Santiago or San Salvador to live there in a shack, without running water.

Consider what it means to struggle to find food and shelter and medical care for some of the poorest people in the world.

Consider what it means to do it in a place that hates you and everything you represent.

Consider what it means to do it anyway, because when you look into the hollow and hungry eyes of the poor, you see the beautiful face of Christ. And you love them. And you want them to feel loved. And so you open your arms for them, like Christ on the cross.And in that way, the gospel is lived, and Christ’s love is known.

And for that, you will sacrifice anything, and everything.

That is what it means to be a missionary. It is happening again and again, not only in Central America, but in China, and Europe and Africa and India and Southeast Asia. In every continent, people like Sister Ita Ford walk through jungles and wade through rivers and bandage sores and cradle dying children and hold the hands of grieving mothers to express, in some small but tangible way, the truth of God’s love. They give themselves. Sometimes, they even give their lives.

How much, after all, did he give? His words in today’s gospel are a proclamation, and a challenge: “The Son of Man did not come to be served, but to serve and to give his life as a ransom for many.”

And they are the legacy being lived by missionaries today.

Just last week, there was news from the Philippines: a 78-year-old Irish Catholic priest, Fr. Michael Sinnott was kidnapped – attacked and dragged from the garden of his house. At last report, he was still being held hostage. It’s believed a radical Muslim group is behind it. His situation is especially serious, because he recently had heart surgery and is very frail.

These people can’t be forgotten. Pray for Fr. Michael. Pray for all missionaries who give so much – all who go into the world not to be served, but to serve. Last week, one of them was declared a saint: Fr. Damien of Molokai. But so many others often go unnoticed – many who, like Christ, sometimes give their own lives as ransom.

Four months before she died, Sister Ita Ford wrote to her 16-year-old niece a letter that speaks beautifully of vocation – and mission.

“I hope you come to find that which gives life a deep meaning for you,” Sister Ita wrote. “Something worth living for – maybe even worth dying for, something that energizes you, enthuses you, enables you to keep moving ahead.”

I think we honor Sister Ita and others like her when we remember her words, and support the great work being done in the missions – support it with donations, yes, but also with our gratitude and, most of all, our prayers.