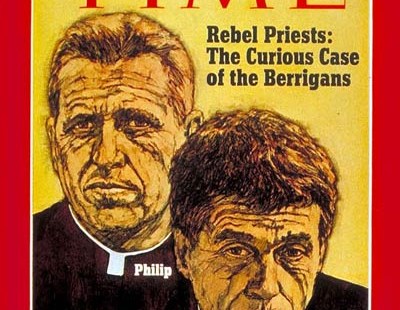 Jesuit Fr. Daniel Berrigan, poet and peacemaker who was one of the most influential voices in shaping Catholic thinking about war and peace during the past century, died today. He was 94.

His death was reported by a number of sources, including Jesuit Fr. James Martin, an editor of America Magazine.

Berrigan gained national attention for his work against the Vietnam War, including his participation in a striking act of civil disobedience with his brother, Philip, also a priest at the time, and seven others who became known as the Catonsville Nine. In 1968, the group burned draft records in the parking lot of a Maryland selective service office from which they had taken files.

It was one of the most spectacular and high-profile actions of a lifetime of civil disobedience and protest against militarism, nuclear weaponry and U.S. war-making.

He was a prolific writer who achieved a remarkable lyricism and poetic force when writing about subjects that normally were explored in academic and military circles. He also plumbed the scriptures and the spiritual depths of the Christian tradition in conducting retreats that challenged the status quo and often upended participants’ presumptions about life in America.

His influence on the peace movement, particularly during the Vietnam era, cannot be overstated; but his aim was not simply peace in Indochina, but peace everywhere. A friend of everyone from Thomas Merton to Dorothy Day to Martin Sheen, and an inspiration to generations of peacemakers, Dan was also willing to be jailed for his beliefs, which were often unpopular in church circles, and sometimes even among his brother Jesuits. (Though Pedro Arrupe, SJ, then superior general of the Society of Jesus, made a point to visit Dan when he was imprisoned in Danbury Prison in the 1970s.) I greatly admired his particular brand of spiritual courage.

“Blessed are the peacemakers,” said Jesus. So blessed was Dan, and blessed were we to have lived with him.