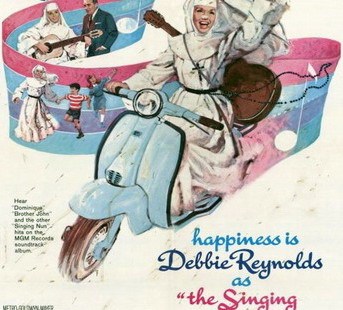 Share
Print
Deacon Greg Kandra - published on 12/29/16
Who could forget this moment from the 1966 musical “The Singing Nun,” loosely adapted from the true life story of Sister Jeanine Deckers? Deckers’ chart-topping hit “Dominique” was translated into English and sung by Reynolds in the movie—losing, I think, some of its charm in the process. But hot on the heels of “The Sound of Music,” (released the year before) this movie about a sister who sings helped catapult the notion of plucky Catholic nuns into the popular imagination. (“The Flying Nun” would soon follow.)

For comparison, you can watch the real “Singing Nun” herself in the clip below, from 1963.

Jeanine Deckers, meantime, wasn’t that thrilled with the movie, reportedly rejecting it as “fiction.”  (Deckers herself had a troubled life in the years after her early success—leaving her order, suffering a breakdown and finally taking her own life in 1985.)

The movie remains an interesting chapter in Reynolds’ career—and one that helped nudge Catholicism into the popular culture at a pivotal moment in the Church’s history.