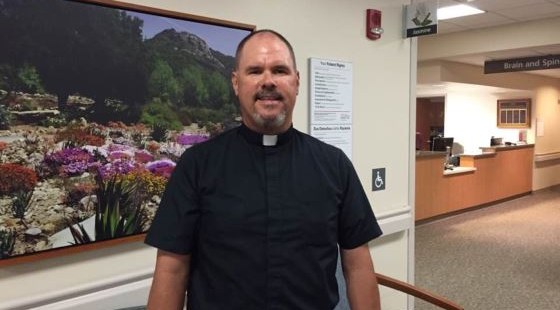 Share
Print
Deacon Greg Kandra - published on 02/08/18
You may remember the stories about this priest from Peoria that I posted two years ago.  I received word this morning that he has gone home to the Lord. I don’t know any other details beyond that.

The most recent account I could find came from a local news report in January:

The popular priest — who from 2006 to 2014 served as St. John’s chaplain and director of the Newman Foundation — is on a lot of people’s minds these days.

Just before the holidays, it was announced that he had been placed in hospice care, a year and a half after sharing with his parish in Bloomington that he had been diagnosed with a cancerous brain tumor. Since that first visit to the MD Anderson Cancer Hospital in Houston, the 50-year-old Ketcham had been providing regular updates on a special page on St. Patrick Church of Merna’s website, but the news turned less hopeful lately.

In August, he thanked everyone for their prayers, cards and texts, which his sisters had been answering since he could no longer text or write. Then, in December, came the hospice news, posted by the Rev. DUSTIN SCHULTZ: “Fr. Greg and his family are much at peace, and though Fr. Greg does continue to struggle and get worse, the Lord continues to give them the grace they need. On behalf of Fr. Greg and his family, I thank you for all your love, support and prayers.”

There are plenty of the latter, coming from fellow clergy and others the monsignor touched.

One of The Rev. LUKE SPANNAGEL‘s favorite homily openings is one he has heard Ketcham give a time or three:

“He would start by saying: ‘I’ll never forget my first love. She was amazing. Beautiful. Fast.’ He would go on a bit and made it sound like it was his first girlfriend. Then he would finish by saying it was his first car.”

Spannagel hopes to pay Ketcham a visit today. The two share a special connection: Now the pastor at Urbana’s St. Patrick’s, Spannagel succeeded Ketcham at St. John’s and as chaplain of the Illini football team.

“Yes, that can be a typical compliment, but it really is a perfect description because he truly embodied those qualities,” he says.

I’ll leave the last word to him. As he wrote when he received his diagnosis in 2016:

Many of you are aware of a shirt that is making its rounds in my honor. In a special way, it was my intention for the back of the shirt to proclaim John 24:17 (adapted) and this is my motto of discipleship and what the world needs to hear: “Jesus gives a peace the world cannot!”

Surely, he knew that peace in this life. May he know it forever in the next.